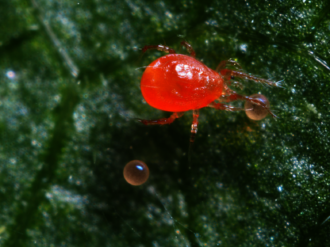 James Walgenbach studied Phytoseiulus persimilis, a predatory mite, and its ability to control two-spotted spider mites in the tomato fields of North Carolina through a Southern Sustainable Agriculture Research and Education (SSARE) grant.

According to Walgenbach, two-spotted spider mites are a pest with a wide range of host plants. Preferring a hot, humid environment, they have the ability to complete a generation interval in less than a week. These mites can be a larger issue in specialty crops where pesticide applications may create an environment where they have no natural enemies.

Similar to a spider, the mite is not an insect but an arachnid. Due to this fundamental difference, some insecticides have limited impact. Specialized formulations called acaricides and some broad-spectrum insecticides are used for control, but frequent applications and the mite’s short generation interval can lead to resistance.

During the multi-year project, “Biological Control of Two-spotted Spider Mite on Vegetables (LS17-284),” Walgenbach determined the distribution of Phytoseiulus persimilis mites in North Carolina and their ability to survive winter. He also researched ways to introduce the mite into new fields and the best way to integrate them into pest management programs for commercial tomato growers.

First, a population survey and overwintering study were held in North Carolina. Results showed persimilis is capable of overwintering in all regions of the state except mountainous areas due to climate. The survey also noted lower predator populations in regions that do not have consistent two-spotted spider mites, its only food source.

Introducing persimilis into a new location was aided with banker plants. Banker plants are insect habitats within a crop that serve as a bank or reserve of natural enemies to help establish a population. Both predator and prey mites were placed on the banker plants to provide a food source for persimilis until it could be established in the field. Testing showed that it takes three to four weeks between their release and their impact on two-spotted spider mite populations.

To determine the best time to release and the best source of mites, tests were conducted using predatory mites from two sources: mites from Koppert Biological raised on beans, and mites from the Walgenbach lab raised on tomatoes.

Mites were released in various patterns within each test plot, but the density of predators remained the same at around 21,000 mites per acre.  After release, fields were monitored for predator and prey mites to determine biological control over time and the spread of predators within fields.

“If persimilis is released without detecting any spider mites, they may leave the field or die off because they don’t have anything to eat,” Said Walgenbach.

In 2019, research showed that predatory mites spread from a single release point spread across a 2.5-acre field over a six-week period. Further research is needed to determine how prey mite populations influence the spread of predatory mites and the most efficient release pattern.

No difference between secondary pests like thrips and flea beetles was noted among the insecticide programs.

Published by the Southern Region of the Sustainable Agriculture Research and Education (SARE) program. Funded by the USDA National Institute of Food and Agriculture (NIFA), Southern SARE operates under cooperative agreements with the University of Georgia, Fort Valley State University, and the Kerr Center for Sustainable Agriculture to offer competitive grants to advance sustainable agriculture in America’s Southern region. This material is based upon work that is supported by the National Institute of Food and Agriculture, U.S. Department of Agriculture, through Southern Sustainable Agriculture Research and Education, under sub-award number: LS17-284. USDA is an equal opportunity employer and service provider. Any opinions, findings, conclusions, or recommendations expressed in this publication are those of the author(s) and do not necessarily reflect the view of the U.S. Department of Agriculture.