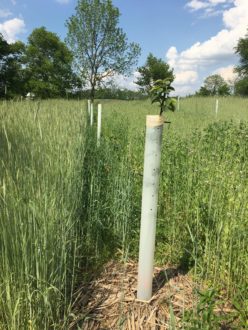 BEREA, Kentucky – A Kentucky farmer, exploring alternatives for tobacco production, has found that elements of an agroforestry system may prove viable to increasing farm profitability and providing environmental benefits.

Through a Southern Sustainable Agriculture Research and Education (SSARE) Producer Grant, Matthew Wilson of Rindlewood Farm studied the feasibility of incorporating sweet sorghum and pasture poultry with orchard production. He found that raising broilers on pasture was a challenge and not a particularly profitable strategy due to feed costs. However, Wilson was successful in growing sweet sorghum between orchard trees (a method known as alley cropping), and producing syrup as a profitable value-added product. In addition, cover crops grown as feed for the broilers, coupled with the sorghum, produced a mulching system that allowed successful establishment and growth of pear and apple trees.

“In our region of Kentucky, many growers have been seeking alternatives for growing tobacco. Agroforestry is one option, but farmers need income while trees become established,” said Wilson. “I was interested in growing a crop between the trees to provide early cash flow, as well as exploring raising livestock to generate early returns, improve soil fertility and help control pests.”

Wilson said that sweet sorghum was chosen because of community tradition of syrup-making and its modest demand as a value-added product. Poultry was chosen as livestock because many producers are returning broilers to pasture to improve animal welfare, meat quality and environmental benefits. However, most of the feed, even in a pasture system, is purchased off-farm. The aim of incorporating poultry into an agroforestry system is to reduce feed costs, which can account for as much as 65 percent of the production process. Wilson faced challenges establishing the summer cover crop mix. Sunflowers shaded out the buckwheat and millet so not enough feed was available when the broilers were put to pasture. In addition, wild birds predated the sunflower seeds before the poultry could utilize the crop. To compensate, a spring cover crop mix of oats and peas was planted to ensure the broilers had enough feed.

Wilson said that while the broilers did well in the field, showing good signs of foraging, the cover crop treatments did not seem to increase feed use efficiency. Calculating the economics of feed costs, labor, and the amount of feed consumed per pound of chicken, Wilson indicated that to break even, he’d have to charge $6/lb for whole birds, which is more than the local market can bear.

“Integrating cover crops into the poultry operation likely contributed to improved soil health, while also providing useful pollinator and wildlife habitat,” said Wilson. “But it does not appear to be a viable strategy for reducing feed costs.” Wilson did see success with the sorghum crop, holding field days to educate farmers on growing, cutting, pressing and cooking the crop for syrup. He yielded an average of 100 gallons of syrup per acre over the course of the study. Wilson also found that the mulch generated from the sorghum residues and the cover crops helped to successfully establish the orchard.

“We were able to successfully establish a small orchard using the residue from the sorghum and cover crops as organic weed control,” said Wilson. “Additional benefits of the mulch were improved moisture retention and likely improved soil quality as the mulch breaks down.”

Wilson also demonstrated that some equipment used in tobacco production could be modified to accommodate the agroforestry system. Float beds traditionally used in growing tobacco plants were used to raise sorghum seedlings and a tobacco setter was attached to the back of a tractor as a transplanter.

Published by the Southern Region of the Sustainable Agriculture Research and Education (SARE) program. Funded by the USDA National Institute of Food and Agriculture (NIFA), Southern SARE operates under cooperative agreements with the University of Georgia, Fort Valley State University, and the Kerr Center for Sustainable Agriculture to offer competitive grants to advance sustainable agriculture in America’s Southern region. This material is based upon work that is supported by the National Institute of Food and Agriculture, U.S. Department of Agriculture, through Southern Sustainable Agriculture Research and Education, under sub-award number: FS18-311. USDA is an equal opportunity employer and service provider. Any opinions, findings, conclusions, or recommendations expressed in this publication are those of the author(s) and do not necessarily reflect the view of the U.S. Department of Agriculture.