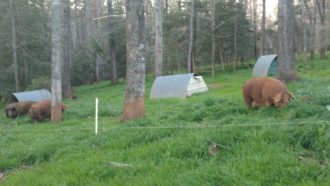 GREENVILLE, South Carolina – Livestock producers with patches of established forested land on their farm can turn to agroforestry practices as an option to increase economic stability while enhancing environmental quality.

Researchers at Furman University, through a Southern Sustainable Agriculture Research and Education (SSARE) grant, studied the feasibility of transforming forested land on farms in South Carolina, North Carolina, and Georgia into silvopasture systems. Silvopasture is a sustainable agriculture practice that integrates trees and livestock in a system that combines grazing with environmental benefits, as well as a secondary income stream.

“Agroforestry systems are not widely used in agriculture, in part because of the time required to grow mature stands of trees,” said associate professor John Quinn. “We wanted to look at the idea of restoring existing forest patches and developing sustainable grazing practices.”

Results of the study (LS16-273), “Improving Silvopasture Systems in the South: Identification of suitable forage crops and enhancement of environmental quality in upland forests,” were mixed.

With the forage mixtures of chicory, rye, alfalfa, and crabgrass, drought during one trial year prevented adequate germination and sufficient plant stand. In addition, researchers found that the forage mixtures did not maintain enough growth in the latter stages of production to provide sufficient forage or soil retention. Ryegrass, however, performed the best in shade conditions.

Researchers expanded the field trials to limited greenhouse experiments to better understand the production dynamics. “In a larger greenhouse trial, with greater replication, we found greater biomass in more species-rich plots,” said Quinn. “There were significant differences between one and two species and three and four species trials. Thus, though further research is needed, three-species mixtures may be a suitable starting point for future field trials in shade conditions.”

Upon removal of invasive plants, researchers noted that bird species richness between the managed and unmanaged forested plots did not differ. However, they found slight variations in bird communities. “We did find that four bird species of conservation concern were present in the silvopasture sites, but not in the control sites,” said Quinn. “The small data size collected limits broader inference, but it does suggest potential opportunities for farmers to collaborate with conservation specialists on forest restoration and wildlife management.”

In order to measure soil health and overall fertility, researchers extracted soil cores between managed and unmanaged forested sites to determine soil carbon and nitrogen concentrations. They compared the results to rotationally grazed pastures on one farm site participating in the project. Quinn and his colleagues found that variations in soil organic matter were not significantly different between forested land and rotationally grazed pastures, as well as between managed forests and unmanaged forests. They also highlight these data will allow for comparisons overtime as the grazing systems mature.

“The results suggest that forest soils, like the pastures, are still recovering from degradation caused by intensive tillage cultivation,” said Quinn. “Removal of invasive plants and increased rotational grazing combined with cover crops may improve soil quality as measured by carbon and nitrogen content.”

Researchers shared the results of the study through on-farm tours, outreach publications, videos and other educational resources.

Published by the Southern Region of the Sustainable Agriculture Research and Education (SARE) program. Funded by the USDA National Institute of Food and Agriculture (NIFA), Southern SARE operates under cooperative agreements with the University of Georgia, Fort Valley State University, and the Kerr Center for Sustainable Agriculture to offer competitive grants to advance sustainable agriculture in America’s Southern region. This material is based upon work that is supported by the National Institute of Food and Agriculture, U.S. Department of Agriculture, through Southern Sustainable Agriculture Research and Education, under sub-award number: LS16-273. USDA is an equal opportunity employer and service provider. Any opinions, findings, conclusions, or recommendations expressed in this publication are those of the author(s) and do not necessarily reflect the view of the U.S. Department of Agriculture.