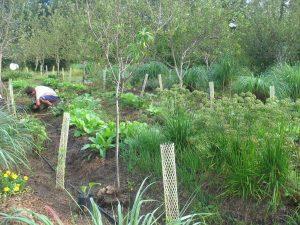 KENBRIDGE, Virginia — It’s 90 degrees, but feels like 105 on the empty white road cutting across Virginia’s flat, coastal plains. There hasn’t been rain in a month and the fields of corn clicking past are curled to grey spikes. The soil between the rows looks like powdered rust. But it’s here, hidden behind pine stands and clear-cuts, that Cricket Cove Farm and Forge established a water-conservation system of berm and swale permaculture in its Southern Sustainable Agriculture Research and Education Producer Grant funded project that’s doing wonders for vegetable crops in these drought conditions. 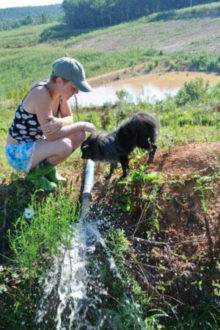 Cricket Cove farmer, Marianne Cicala (‘cicala’ means ‘cricket’ in Italian), proposed the permaculture system to diversify the crops that supply her four-county CSA. By introducing that diversity, she hoped to buffer the farm’s bottom-line from winterkill losses. Instead, the curving permaculture banks, the tree guilds, and mounds of insectary herbs and flowers are holding rain, guiding irrigation, and bolstering soil health — protecting the crops from drought.

“Permaculture”, the word and the philosophy, is a contraction of the words “permanent,” “agriculture,” and “culture.” Like sustainable living, permaculture isn’t easy to define, advocates say, but its practices seek to design human systems, based on natural ecosystems. Defined broadly, perennial food production systems grow perennial crops like fruit, nuts, grass, trees, and animals — sometimes all together in an agricultural ecosystem. Cricket’s Cove is one of nearly a hundred producers across Virginia who count themselves as “perennial” or as having perennial values, according to the mapping site Perennialmap.org, that works to link those farms to each other and their allies.

For Cicala, building the system was a lot of work up front, but it’s now paying off, she says. In the SSARE Producer Grant (FS16-287) project, “Retrofitting an Existing Orchard,” Cicala grew a clover cover crop and tilled it in. Then, with intern help, she built permanent beds, rows, and paths forming the soil into long, wavy, off-contour berms and swales, hillocks and ditches. Like a healthy creek, those curving banks are designed to steer and slow rain and irrigation water, allowing it to be sucked into the sides of the berms and sopped up and stored by an increasingly spongy soil. Trees are planted on tops of the berms, their roots stabilizing it. Smaller, understory nut and fruit shrubs and water-loving crops like blueberries grow below. With no need to till, Cicala now simply top-dresses the berm with compost, then seeds or transplants her spring crop.

“It took less than a day to completely prepare all of our beds for spring planting,” she said. 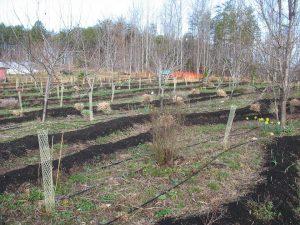 Touring the orchard on a baking July noon, Marianne, an elegant farmer, blonde in a chamois-yellow blouse, enormous sunglasses, and paint-spattered jeans, marches along the hot edge of the flower- and herb-filled orchard describing the SSARE project and the farm’s larger vision.

The project’s goal of increasing diversity ultimately sought to multiply profitability per square foot. “We planted about 30 percent of the new growing space with perennial pollinators,” she said. Plants are arranged together in “guilds” or clusters, she explained, according to nutrient, light, and water requirements.

In a polyculture like this, every plant serves multiple roles, both as a marketable good and as a member of the farm ecosystem.

Wading through the mounds of mint, yarrow, oregano, sages, foxglove, daisies, bee balm, and lavender keep berm banks cool and smell wonderful, and are quivering with bees. Most importantly, they’re a lucrative crop, harvested for the CSA.  “We do a huge herb business…basil, dill, marjoram. Huge,” said Cicala.

And the orchard is an Eden, if a little weary in the blazing heat. “Under, above, beside. In this kind of heat, everything gets shade at some point,” said Cicala, pointing out the mulberry, honeyberry (an edible honeysuckle fruit) and blueberries are planted along the top of the berms beneath apple and peach shade.

Marianne Cicala comes to farming from a decades-long career in finance and marketing that may have fostered the playful scrappiness and grand-scale view that is evident in her landscape-scale projects.

She is frank about the trial-and-error of farming. “These are peaches. Those are pears, which I regret – it’s too humid. Fire blight…big disaster.” Then, pointing to leafy seedlings still in their protective netting in the shade between the beleaguered pears, she said, “But all those cages are mulberries. They went in with the grant.  And they’re happy as hell.”

All over her farm, Cicala is asking research questions. She’s growing alternative crops like passionfruit and that honeyberry, engineering water-protective terraces on once unplantable hillsides, sculpting and cultivating a mound of infertile soil clawed out to make an irrigation pond. She’ll evaluate temperature variations and changes in soil fertility as that soil ages.

“We do an enormous amount of research here. For instance, we grow rice. It grows so well here, it’s insane. We had six paddies last year. I harvested so much rice, I only wanted to do one bed this year,” said Cicala. “I’m also building a swaled pasture with apple, mulberry hazelnuts. I said, ‘Why are people not growing rice?’ It’s a stupid-easy crop! We’ve got five rice paddies we’ll flood, seed, put hilled rows into them. Then! We’ll go into the orchard and seed. And plant them on the same day. Just to compare them.”

The scrappy daring and big-picture view of Cicala’s polyculture approach is built to tackle the challenges of months-long drought, and market vagaries, and tussle out the hard-won rewards out of farming. SARE has played a role is capturing some of that scrappiness and daring.

This article was written and contributed by Elizabeth Kirchner, former SSARE program assistant for Virginia.

Published by the Southern Region of the Sustainable Agriculture Research and Education (SARE) program. Funded by the USDA National Institute of Food and Agriculture (NIFA), Southern SARE operates under cooperative agreements with the University of Georgia, Fort Valley State University, and the Kerr Center for Sustainable Agriculture to offer competitive grants to advance sustainable agriculture in America’s Southern region. This material is based upon work that is supported by the National Institute of Food and Agriculture, U.S. Department of Agriculture, through Southern Sustainable Agriculture Research and Education, under sub-award number: FS16-287. USDA is an equal opportunity employer and service provider. Any opinions, findings, conclusions, or recommendations expressed in this publication are those of the author(s) and do not necessarily reflect the view of the U.S. Department of Agriculture.