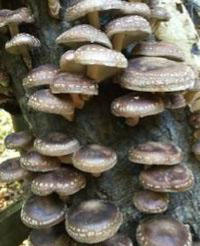 TALLAHASSEE, Florida – Some non-native invasive trees in the Southeast have proven to be ideal substrates for growing edible mushrooms, according to the results of a USDA Agricultural Research Service study funded by a Southern Sustainable Agriculture Research & Education (SSARE) On-Farm Research Grant.

USDA-ARS researcher Stephen Hight, in collaboration with small farmers in southern Georgia and north Florida, successfully produced shiitake mushrooms on the logs of Chinese tallow – an aggressive, non-native tree that will push out native species and turn diverse habitats into monospecific areas without proper management.

Hight said he was looking for ways to more effectively and more economically manage invasive species while providing additional or alternative agricultural income for landowners or small farmers.

“Removal of invasive species, especially trees, is often time consuming and expensive. Even for a private landowner or small farmer, the cost of cutting down invasive trees and removing the waste generated by branches and trunks consumes resources in time, effort, personnel, and finances,” said Hight. “In an effort to help offset some of these expenditures for small farmers, our overall objective was to evaluate the potential of using non-native tree logs, common to the Southern region, to produce edible and marketable mushrooms.” 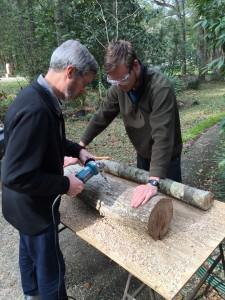 In the SSARE-funded study (OS14-086), “Use of Non-native Invasive Tree Logs for Commercial Mushroom Production on Small Farms,” Hight took the results of a 2014 pilot study, which showed substantial production of shiitake on Chinese tallow and native oak species (commonly used to cultivate mushrooms), and expanded it to include invasives like the Mimosa tree and the Chinaberry tree.

Results from the two-year study showed that mushroom inoculant did not establish on the Mimosa tree or Chinaberry tree logs. Expanded comparisons between oak and Chinese tallow revealed that the overall production of shiitake mushrooms on oak tree logs produced significantly more mushrooms in number and in weight than tallow logs – over a pound per log on the oak logs compared to less than a pound on the tallow logs, with the oak logs producing roughly 3 times more mushrooms than the tallow logs. 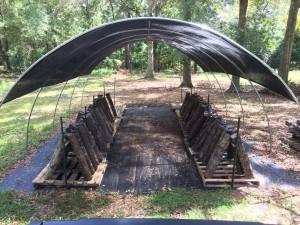 “The point,” said Hight, “is that our project demonstrates the viability of logs from invasive trees to produce shiitake mushrooms on small farms in the Southeast as an additional source of income.”

The results of the project also demonstrates that producing edible mushrooms on invasive tree species can be an efficient use of on-farm natural resources that enhance the ecosystem, improve environmental quality, and protect biodiversity, in addition to maximizing the local food system.

Published by the Southern Region of the Sustainable Agriculture Research and Education (SARE) program. Funded by the USDA National Institute of Food and Agriculture (NIFA), Southern SARE operates under cooperative agreements with the University of Georgia, Fort Valley State University, and the Kerr Center for Sustainable Agriculture to offer competitive grants to advance sustainable agriculture in America’s Southern region. This material is based upon work that is supported by the National Institute of Food and Agriculture, U.S. Department of Agriculture, through Southern Sustainable Agriculture Research and Education, under sub-award number: OS14-086. USDA is an equal opportunity employer and service provider. Any opinions, findings, conclusions, or recommendations expressed in this publication are those of the author(s) and do not necessarily reflect the view of the U.S. Department of Agriculture.