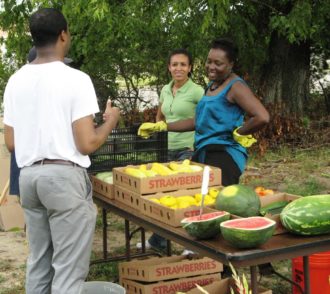 RALEIGH, North Carolina – North Carolina farms that sell directly to consumers are more interconnected with their local economies than non-direct-to-consumer farms, and have a greater multiplier effect of generated revenue, based on the results of a North Carolina State University survey.

The results, which could have applicability on a regional level, are intended to aid agricultural sectors, business communities and policymakers in developing a stronger local food economy through job creation, infrastructure investments and other related areas. A series of tools (videos, infographics, interactive online data visualization sets, webinars, courses and case studies) are being developed for such a purpose.

“The purpose of the project was to quantitatively evaluate the unique economic impact of producing, processing, distributing and selling agricultural goods locally as compared to those imported from outside state lines,” said Drew Marticorena, a researcher in the Department of Horticultural Science at NCSU. “We studied how the revenue a good generates, as it moves from producer to processor to distributor to consumer, was affected by whether or not it originated locally.”

The results highlight the unique position North Carolina is in with regards to using local foods as a driver for economic development, especially in rural areas, said Marticorena.

For one, agriculture across the state is quite diverse, with a large range of farm sizes, values, profitability and marketing strategies. Secondly, farms of all but the highest values and acreages engage in direct to consumer sales. Lastly, the point at which North Carolina farms become profitable reliably is around 100 acres in size, though there are certainly many profitable smaller farms

“The last two points are particularly important for proponents of local foods movements to consider because of the outstanding issues with the ongoing loss of midsize farms and improving farm profitability,” said Marticorena.

“Farms that engage in direct to consumer sales bought from more entities than those that did not, specifically in the Piedmont region,” said Marticorena. “This finding was most evident with farms that make less than $256,000 a year.”

“This finding implies that expansion into the local foods sector is realistic for all but the largest farms in North Carolina, and in doing so may be an opportunity for them to increase profitability,” said Marticorena.

The researchers indicated that while the findings may have a statewide impact, more work needs to been done to measure the value of local foods to local economies on a regional level.

“As new markets develop or are strengthened for local products to meet consumer demand, producers are able to grow for these markets by shifting their products locally while capturing the revenue and marketing opportunities involved,” said Marticorena.

Published by the Southern Region of the Sustainable Agriculture Research and Education (SARE) program. Funded by the USDA National Institute of Food and Agriculture (NIFA), Southern SARE operates under cooperative agreements with the University of Georgia, Fort Valley State University, and the Kerr Center for Sustainable Agriculture to offer competitive grants to advance sustainable agriculture in America's Southern region. This material is based upon work that is supported by the National Institute of Food and Agriculture, U.S. Department of Agriculture, through Southern Sustainable Agriculture Research and Education, under sub-award number: LS12-248. USDA is an equal opportunity employer and service provider. Any opinions, findings, conclusions, or recommendations expressed in this publication are those of the author(s) and do not necessarily reflect the view of the U.S. Department of Agriculture.