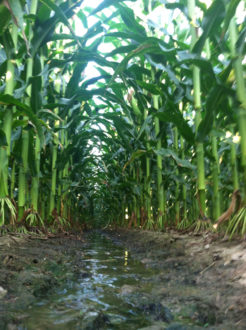 STONEVILLE, Mississippi – Will Hart, a young 30-something farmer who produces corn and soybeans on 3,000 acres in the Mississippi Delta, remembers the “old way” his grandfather determined whether the crops needed water.

“We’d go out in the field and kick the dirt,” said Hart. “If it was dry, then the crops got water.”

Today, farmers in the Delta are more realistic with their irrigation management, using furrow irrigation: perforated poly pipes connected to water pumps on a timer that drive water between crop rows. Turns out, like kicking the dirt, the application is not very efficient. How much water does the crop need? How long is the watering event? Is the water reaching the plant roots, or is it just running off?

Through Mississippi State University research, Hart is among 75 percent of farmers in the Delta who are now using a suite of irrigation management tools that tells them those very things. It’s saving farmers money by streamlining pumping time and saving water and inputs, while producing comparable or better crop yields.

“The purpose of the technology is to make furrow irrigation as efficient as possible,” said MSU Extension professor Curt Lacy. “We’ve proven that we can save producers money and produce equivalent or increased yields. More and more farmers are realizing that it works.”

Through a Southern SARE Professional Development Program grant, Lacy and his colleagues are training county Extension agents across the Delta to bring the technology to farmers. The goal is to stem the rapid decline of the Mississippi River Valley alluvial aquifer, the primary water source for corn, soybeans and cotton farmers across the Delta.

“We recognized early on that something needed to be done to address the declining aquifer. The whole idea was to come up with irrigation techniques that demonstrate maintained or increased profits, while reducing water usage,” said Lacy. “The SARE grant allowed us to get the equipment that the agents needed to get farmers on board with the irrigation management program.”

Center pivot surface irrigation is common across much of the U.S. cropland. But furrow irrigation is unique to the Mississippi Delta, satisfying the water needs of corn and soybean crops across thousands of acres of flatland when cotton fell out of favor with producers in the region. As such, irrigation management programs to promote more efficient water usage needed to be specially designed to fit furrow irrigation practices.

Through the SSARE grant project (ES16-127), “Reducing Water Usage and Energy Costs Through Improved Irrigation Management,” Extension agents provided over 300 consultations, reaching 1,100 farmers and impacting over 25,000 acres of cropland. At the minimum, most farmers in the Delta are using Pipe Planner, which is a free application.

The real magic happens when farmers add moisture sensors to the process. Pipe Planner may help regulate water flow, but the sensors can tell farmers how much water the crop actually needs.

“The sensors tell us at what levels in the soil the water is located,” said Aust. “The sensors help farmers reduce the number of times they have to water, which reduces the pumping time, the amount of diesel fuel being used, the amount of electricity being used…all around it’s saving farmers money.” “The soil moisture sensors tell us what’s going on below ground that you can’t see with the naked eye above ground,” said Jack. “With the sensors, we know when to irrigate and when not to. The likelihood of over watering when the plants don’t need it is high without them.”

Jack has 64 moisture sensors installed on his 12,000 acres, with the sensors tied to the well pumps and operated by remote telemetry via mobile devices.

Farmer Wyatt Skelton was convinced of the technology after comparing his corn yields without the technology to an Extension demonstration site that utilized moisture sensors.

“I was getting beat every year,” said Skelton, who owns Tricotn Farm in Shaw, MS. Skelton farms 2,700 acres of a corn/soybean rotation.

“After implementing the moisture sensors, my irrigation events went from 9-11 times per year down to 3-5 times on average. And with 50 percent less irrigation, I was yielding more bushels of corn. Corn generally doesn’t need a lot of water until the V-10 stage. We were hurting our corn by watering too early.”

Skelton said that in the past, irrigation would begin on Monday and finish by Friday, and then he’d take the weekend off. “There’s this saying that if you can keep a goldfish alive in a ditch, then you can keep a corn crop,” said Skelton. “But with using the moisture sensors, if you know that you have 4 days of water left in the ground and you’ve got a rain coming that could carry you the rest of the week, you’ve got that peace of mind that you are making the right call. There are too many variables with irrigation and the technology helps you narrow those variables down.” Mississippi State University researchers received funding from the Natural Resources Conservation Service to continue the program and help farmers obtain the equipment to implement a more efficient irrigation management system on their farm. Through the funding, not only are Extension agents able to provide farmers with moisture sensors, but some farmers are also installing surge valves – the final piece in the irrigation management toolbox.

Surge valves make sure that water is getting into the soil profile, specifically when farmers have some types like clay soils that don’t soak up water as readily and quickly as other soil types, like sandy soils.

“Surge valves ensure we are getting water into the soil profile, rather than just flowing off,” said Jack. “We can stretch our irrigation needs out another couple of days using them.”

Hart, who operates Hope So Farm in Inverness, MS, uses surge valves on his 3,000 acres of heavy clay soils. “The surge valves slow our water down. We were watering too fast in the past.”

Aust said that farmers in the Delta are recognizing they need to do their part to conserve water.

“There are 27,000 gallons of water per an acre-inch and it takes roughly three acre-inches to furrow irrigate. You do the math. That water can’t continue to come from the aquifer at that rate for agriculture to remain sustainable,” said Aust. “The irrigation management program is all about the watering process, not about when to simply turn the water on and off.”

Published by the Southern Region of the Sustainable Agriculture Research and Education (SARE) program. Funded by the USDA National Institute of Food and Agriculture (NIFA), Southern SARE operates under cooperative agreements with the University of Georgia, Fort Valley State University, and the Kerr Center for Sustainable Agriculture to offer competitive grants to advance sustainable agriculture in America’s Southern region. This material is based upon work that is supported by the National Institute of Food and Agriculture, U.S. Department of Agriculture, through Southern Sustainable Agriculture Research and Education, under sub-award number: ES16-127. USDA is an equal opportunity employer and service provider. Any opinions, findings, conclusions, or recommendations expressed in this publication are those of the author(s) and do not necessarily reflect the view of the U.S. Department of Agriculture.