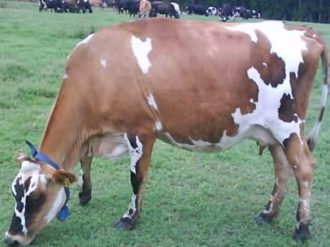 RALEIGH, North Carolina – Herbal treatments have been found to be just as effective as conventional antibiotics in some situations for treating or preventing mastitis in dairy cattle, based on the limited results of a North Carolina State University study.

“We found no differences between the herbal remedies and the conventional therapy when we measured milk yield or somatic cell count, which is a measure of milk quality,” said Mullen. “And the treatments didn’t have any apparent negative impact on the health of the cattle.”

Mastitis is an inflammation of the mammary gland most frequently caused by a bacterial infection, and can be costly for dairy producers if left untreated.  According to the NMC, an organization devoted to reducing mastitis and enhancing milk quality, it’s been estimated that mastitis costs about $200 per cow per year. In herds without effective treatment, approximately 40 percent of cows are infected in an average of two quarters. The two herbal treatments studied were Phyto-Mast®, a botanical multi-purpose intra-mammary preparation for improvement of milk quality, and Cinnatube™, a blend of essential oils thought to work as a teat sealant intended to reduce new infections between lactations.

In a trial of over 400 dairy cattle, the efficacy of the herbal treatments was compared to conventional antibiotics and no treatment at all during the dry-off period (between the end of lactation and giving birth).

“We didn’t have many mastitis infections at dry-off during the study, which is good for the farmer, but it limited our research results,” said Mullen. “However, in cases where we did have infections, the herbal treatments were just as successful as conventional therapy in curing infections during the dry period, but not significantly better than no treatment.”

In some cases, Cinnatube was significantly better than no treatment at preventing infections from occurring.

“The herbal remedies contain ingredients that serve as antibacterial and strong anti-inflammatory agents, as well as immune stimulants,” said Mullen, “which is why they may have performed well compared to the conventional treatments.”

Both herbal remedies require a veterinarian prescription. However, costs appear to be comparable to conventional antibiotics, noted Mullen.

“This research has helped dairy producers understand that alternatives to antibiotics exist for treating mammary infections in dairy cattle,” said Mullen. “There is potential for both organic and conventional dairy producers to use these alternatives.”

Ultimately, said the researchers, alternatives to antibiotics could benefit consumers by eliminating the risk of antibiotic residues in milk/meat and by lowering the contribution of the dairy industry to the development of antibiotic-resistant bacteria.