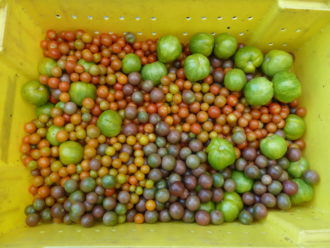 GAINESVILLE, Florida – Grafting can help control diseases in organically grown high tunnel tomatoes, according to the results of a University of Florida study.

Grafting involves joining the upper part of a plant, called the scion, to the lower part of another plant, called the rootstock, in an effort to combine the genetic strengths of both plants, from disease and pest resistance and tolerance, to abiotic stresses, to more vigorous performance and improved yields. 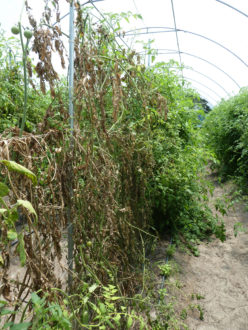 “The trial was designed to help the grower overcome the soil-borne disease problem in his high tunnel tomato system under organic production. In particular, ‘Black Cherry’ is highly susceptible to Fusarium wilt based on its performance in the previous season before the on-farm study,” said Zhao. “The lack of disease resistance in many of the heirloom and specialty tomato cultivars is a constant challenge for growers. Grafting was introduced to the farmer in this study as a potential solution while he was searching for new management tools to improve his current production system.”

Researchers found that disease severity of Fusarium wilt was significantly lower in grafted plants of ‘Black Cherry’ and ‘Green Zebra’ than non-grafted controls by 21 percent to 71 percent. Leaf mold was mainly observed on ‘Sun Gold’ and ‘Supersweet 100’, while grafted plants also showed less severe symptoms of leaf mold compared to non-grafted plants, with reductions ranging from 25 percent to 31 percent.

In addition, researchers found that fruit yield increased in the grafted plants, anywhere from 139 percent to 485 percent depending on the scion cultivar.

Results from this study may be useful for organic growers seeking non-chemical Integrated Pest Management (IPM) tools for their production systems, and specifically address challenges growers face in managing diseases and pests in high tunnels.

Published by the Southern Region of the Sustainable Agriculture Research and Education (SARE) program. Funded by the USDA National Institute of Food and Agriculture (NIFA), Southern SARE operates under cooperative agreements with the University of Georgia, Fort Valley State University, and the Kerr Center for Sustainable Agriculture to offer competitive grants to advance sustainable agriculture in America’s Southern region. This material is based upon work that is supported by the National Institute of Food and Agriculture, U.S. Department of Agriculture, through Southern Sustainable Agriculture Research and Education, under sub-award number: OS13-083. USDA is an equal opportunity employer and service provider. Any opinions, findings, conclusions, or recommendations expressed in this publication are those of the author(s) and do not necessarily reflect the view of the U.S. Department of Agriculture.