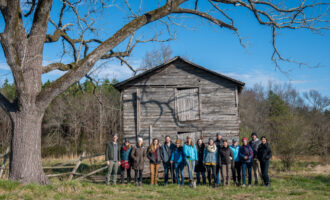 In 2019, Duke was awarded an On-Farm Research Grant through the Southern SARE program. This grant funding helped combine the efforts of the Duke Campus Farm, the Duke Carbon Offsets Initiative, and the Duke Environmental Law and Policy Clinic. About to begin its third year, this diverse team leads groups of undergraduate and graduate students in a year-long program designed to bring the real-world into the classroom while working alongside faculty.

The program, called Bass Connections, focuses on a type of livestock farming called regenerative grazing. This style of livestock production tries to not only produce quality livestock, but improve the soil by combining new and old farming practices.

As the program manager of the Duke Carbon Offsets Initiative, Matthew Arsenault is a key contributor to the project, and has worked closely with the team throughout the grant.

“The Duke Carbon Offset Initiative has been in progress for over a decade. We’ve worked on carbon offset projects in the past that followed the typical, well-trodden paths, but we were interested in something innovative. We hadn’t had any interaction with agriculture before this project but we started with the idea of creating a zero-carbon restaurant. After a bit of research, we saw that meat has a lot of potential to reduce carbon emissions but we needed to start earlier in the supply chain.

“The voluntary carbon market that Duke University operates in isn’t always well regulated, especially with regard to new soil methodologies. So, in this project we wanted to move into something that was more strictly defined. We look for several levels of rigor in a good carbon offset system and wanted to see how those would apply in the real-world,” said Arsenault.

In beginning of the project, students from Duke interviewed farmers across the state to learn more about their practices and develop a deeper understanding of farmers who already implemented regenerative grazing practices. They collected information on the acreage, herd size, and specifics about their livestock rotations, supplemental feed needs and fertilizer use.

“From origin of the program, we weren’t interested just in developing a protocol for Duke and other institutions looking to buy voluntary offsets. Our interest was in a broader suite of ecological benefits.

Working with farms across North Carolina, students conducted research on existing carbon markets and the protocols for farmers to profit off their ability to store carbon in the soil.

The project also worked with the Triangle Land Conservancy on a soil sampling methodology. In this phase of the grant, they began monitoring changes to soil and carbon levels at a test site in the Bailey and Sarah Williamson Preserve where livestock are rotationally grazed. As the project continues, students will continue to monitor and collect data from the site.

Throughout the process, the team created materials and protocols to reward farmers who already embraced these practices, while addressing the barriers that stopped farmers from changing their practices. They also developed a series of protocols and policy options for the local, state, and national level designed to promote the creation of a carbon offset system that would work in the real world. All of this information is shared on a website called www.regenerativegrazingnc.org that was created through the grant project.

Both students and instructors from the team built a network of producers and other stakeholders as they attended conferences, published a newsletter on the project and conducted site visits with farmers in North Carolina.

In the future, the team from Duke will continue to build upon the project as they work with students to develop a practical system that pays farmers for improving the environment of North Carolina and offsetting the carbon emissions from others.