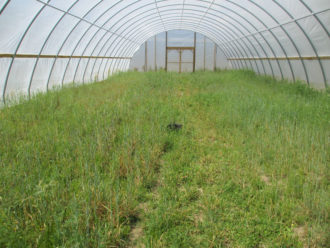 GLENWOOD, Georgia – Barley and hairy vetch growing vigorously in a high tunnel at Lola’s Organic Farm in southeast Georgia were going to seed. It was mid-April. Time to mow and prepare the soil for the summer’s cash crops: ginger and turmeric.

Since last year, couple Jennifer Taylor and Ron Gilmore – USDA certified organic farmers – have been playing around with growing cover crops in high tunnels, following the positive results of a Southern Sustainable Agriculture Research & Education (SSARE)-funded Producer Grant project that showed cover crops grown in the field ahead of a cash crop can suppress weeds and build soil health.

They wanted to see if incorporating cover crops in high tunnels produced the same results. So far, the answer is yes.

“In fact, the effects of cover crops in a high tunnel are much better than what we even found in the field,” said Gilmore. “Cover crops hold moisture a lot longer in the soil and weed management is a lot better with cover crops used as compost in high tunnels.”

The couple have two high tunnels on their farm, obtained through the NRCS High Tunnel System Initiative. Barley and hairy vetch were targeted in one high tunnel because they both fix nitrogen in the soil, and Jennifer read that barley also uptakes heavy metals (copper, cadmium, zinc), as well as salt, which can accumulate to toxic levels in high tunnels. 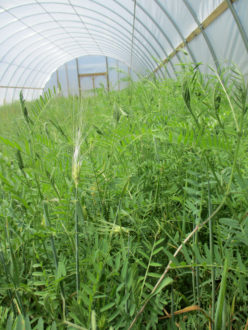 A mix of barley and hairy vetch in a high tunnel at Lola’s Organic Farm. Photo: Southern SARE

“That’s the fine line farmers walk when it comes to using cover crops. We don’t want to sacrifice soil with cover crops if we can’t make cash off it,” said Gilmore. But the couple does see the benefits of using cover crops on their farm beyond the dollars and cents. Cover crops provide a solution to weed, pest and soil management challenges inherent to an organic farm.

Cover crops have now become an integral part of Lola’s Organic Farm crop production: subterranean clover covers the ground around muscadine vines; a barley/hairy vetch/subterranean clover mix is being planted ahead of organic peanuts; and pigeon pea is planned for new land currently being cleared for production. All fix nitrogen, choke out weeds and improve soil health. 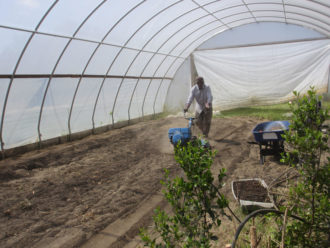 The couple’s interest in cover crops may have not been realized save for a little on-farm problem called bermudagrass. “It just kept choking the life out of our plants,” said Gilmore.

Taylor and Gilmore were convinced. Today, no cash crop is produced on Lola’s Organic Farm without some type of cover crop incorporated into the soil first. 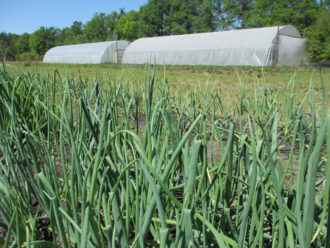 Published by the Southern Region of the Sustainable Agriculture Research and Education (SARE) program. Funded by the USDA National Institute of Food and Agriculture (NIFA), Southern SARE operates under cooperative agreements with the University of Georgia, Fort Valley State University, and the Kerr Center for Sustainable Agriculture to offer competitive grants to advance sustainable agriculture in America’s Southern region. This material is based upon work that is supported by the National Institute of Food and Agriculture, U.S. Department of Agriculture, through Southern Sustainable Agriculture Research and Education, under sub-award number: FS13-267. USDA is an equal opportunity employer and service provider. Any opinions, findings, conclusions, or recommendations expressed in this publication are those of the author(s) and do not necessarily reflect the view of the U.S. Department of Agriculture.