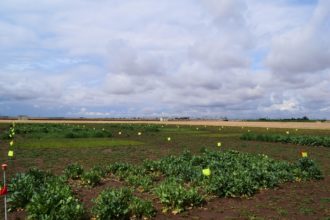 LIVE OAK, Florida – For farmers in central Florida, planting cover crops in strips as a trap crop alongside cash crops is proving to be a highly effective method for attracting beneficial insects and controlling pests. Farmers have been so pleased with the results that they have fully adopted the Integrated Pest Management (IPM) strategy as an alternative to using chemical insecticides.

In a Southern Sustainable Agriculture Research and Education (SSARE) On-Farm Research Grant, two small organic farms teamed up with the University of Florida to test the prevalence of beneficial and predatory insects in strip plantings of selected annual cover crops, such as sunflower, rye, triticale, sunn hemp and buckwheat.

“We are trying to find out what we can do to limit our chemical applications,” said Bradley Hoover, of Hoover Farms. The young farmer owns 20 acres of about 50 different types of vegetables, all certified organically grown and sold in the wholesale market. “The benefit of using plants to manage pests has not yet been realized on the farm, and that’s what we are trying to do here.”

In the study (OS13-079), “Establishing and Evaluating Selected Cover Crops on Small Farms to Increase the Impact of Beneficial Arthropods on Crop Pests,” buckwheat was the star on Hoover Farm. University of Florida regional Extension agent Bob Hochmuth and his research team counted over 60 families of beneficial and predatory insects ranging from true bugs, to bees, to parasitoids on the cover crops, mainly on buckwheat.

Hoover said that he was interested in how well the trap crops would control stinkbugs, a major pest of tomatoes and peppers. The results were positive. In one example, researchers collected nymphs and adults of four species of stinkbug and found that all of them were parasitized by an orange tachinid fly, which is attracted to the blooming stage of buckwheat. Sunflower was also found to be effective in managing the leaf-footed bug.

Hoover has since planted larger blocks of buckwheat for a year-round trap cropping system. Current cover crops implemented on the farm include rye as a winter cover crop, sunn hemp as a summer cover crop for soil building, and buckwheat to support beneficial and predatory insects.

Scott and Billie Rooney of Rooney’s Front Porch Farm shared similar positive results, specifically with buckwheat and triticale. Over 40 families of beneficial and predatory insects were collected. Primary emphasis was given to managing stinkbug in their blueberry plants.

The Rooneys adopted planting buckwheat strips on their farm to increase beneficial insects, and triticale as the primary trap crop to eliminate stinkbugs that arrive early in the season. The system has worked so well for the farmers that they have fully adopted using a triticale trap cropping system on their entire farm.

The on-farm field trials represent an extension of the ongoing use of trap crops at the University of Florida Suwannee Valley Agricultural Extension Center. The IPM strategy has transformed unsustainable pest management practices from weekly pesticide applications to infrequent spot treatments based on scouting and pest thresholds. This has resulted in more than a 50 percent reduction in insecticide applications on the 300-acre farm.

Published by the Southern Region of the Sustainable Agriculture Research and Education (SARE) program. Funded by the USDA National Institute of Food and Agriculture (NIFA), Southern SARE operates under cooperative agreements with the University of Georgia, Fort Valley State University, and the Kerr Center for Sustainable Agriculture to offer competitive grants to advance sustainable agriculture in America’s Southern region. This material is based upon work that is supported by the National Institute of Food and Agriculture, U.S. Department of Agriculture, through Southern Sustainable Agriculture Research and Education, under sub-award number: OS13-079. USDA is an equal opportunity employer and service provider. Any opinions, findings, conclusions, or recommendations expressed in this publication are those of the author(s) and do not necessarily reflect the view of the U.S. Department of Agriculture.