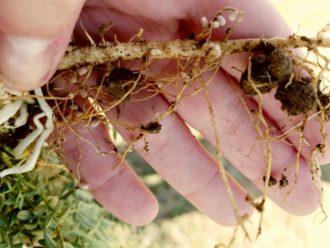 Nutrient management is a timely agricultural topic that boils down to determining the right rate, source, timing, and placement of nutrients. Nitrogen is of particular concern because it is highly mobile in the environment. It readily leaches down through the soil, runs off into surface water, and volatilizes into the atmosphere. By minimizing nitrogen loss from their cropping systems, farmers can minimize their environmental impact while lowering the cost of production by increasing nitrogen efficiency.

Cover crops can greatly influence nitrogen management either by providing available nitrogen for cash crops or by immobilizing nitrogen and creating the need for greater nitrogen fertilizer for cash crops. The amount of nitrogen available from cover crops and the timing of its release is complex. Nitrogen availability from decomposing cover crops is affected by plant biomass quantity and quality, species mixture composition, cover crop management (i.e. termination timing), and climate. Ultimately, the goal is to maximize nitrogen efficiency by decreasing nitrogen loss from the system and maximizing synchronization between nitrogen release from cover crop biomass and corn nitrogen demand.

In order to estimate the amount of nitrogen that could be released from a cover crop, you first need to know how much nitrogen the cover crop potentially accumulated in its tissues. Grasses (i.e. cereal rye—Secale cereale) and broadleaves (i.e. forage radish— Raphanus sativus) scavenge residual nitrogen from the soil. The potential for grass and broadleaf cover crops to accumulate nitrogen is thus partly dependent on the soil fertility in a field. In a field with low residual fertility such as after a highly productive corn crop, such cover crops may not accumulate much nitrogen and thus will have less nitrogen to release to a following cash crop. Legumes (i.e. hairy vetch— Vicia villosa) fix nitrogen from the atmosphere and thus legume nitrogen accumulation is less dependent on residual soil fertility. With all cover crops, however, nitrogen accumulation is also dependent on biomass production. A cover crop that has produced little biomass will likewise have accumulated less nitrogen than a more robust cover crop.

Broadleaf cover crops such as forage radish and phacelia vary, but typically have low to moderate C:N ratios. The ratio of C:N in a given cover crop can vary with growth stage, especially in grasses. Cereal rye at the tiller stage will have a lower C:N ratio than cereal rye at anthesis (flowering). Cover crops with high C:N ratios are slow to decompose and risk depriving a following cash crop of timely needed nitrogen through nitrogen immobilization in the soil. Cover crops with low C:N ratios decompose quickly and thus risk loss of the nitrogen from the system (i.e. through leaching) before a following cash crop could make use of it.

Cover crop mixtures are useful because they allow you to “balance” the cover crop C:N ratio, increasing the likelihood that nitrogen will be available at the time of highest cash crop demand, such as V6 in corn. In cover crop mixtures, potential nitrogen accumulation and subsequent release is dependent on the species composition. A mixture in which grasses such as annual ryegrass (Lolium multiflorum) dominate will have a higher C:N ratio than a mixture in which legumes such as winter pea (Pisum sativum subsp. arvense) dominate. A cover crop mixture with a moderate C:N ratio of roughly 25:1 strikes a balance between preventing nitrogen loss while also avoiding long-term soil nitrogen immobilization.

crop. Cover crop species with high C:N ratios at maturity may be terminated early (i.e. at tillering rather than anthesis) to decrease the risk of nitrogen immobilization in the soil.

The Keys to Maximizing Nitrogen

There are several things farmers can do to make sure that they are getting the most nitrogen out of a cover crop. First, treat your cover crop like a crop. This means using good quality seed, the right seeding rate, and timely planting with good seed soil contact so you obtain a good stand. Deal with weeds and weed seeds before you plant the cover crop. Plant just before a rain or irrigate the cover crop so it gets a good start. If you are planting legumes, use a fresh inoculant and make sure you are using the right inoculant for the legume species planted. This is just good insurance to maximize the amount of nitrogen fixed by the cover crop. All these practices will help you get a good stand that will maximize biomass. Finally, terminate the legume at mid-bloom when the cover crop contains the most nitrogen. If you are concerned about nitrogen immobilization due to a cover crop with a high C:N ratio, consider terminating it prior to anthesis when the C:N ratio is relatively low. Also consider growing a cover crop mixture of at least one species with a high C:N ratio (i.e. cereal rye) and one species with a low C:N ratio (i.e. hairy vetch) to balance the C:N ratio and maximize total biomass accumulation and nitrogen accumulation.

Predicting the amount of nitrogen provided by a cover crop can be difficult due to the combination of factors that affect nitrogen release. In the past, rules of thumb such as half the total nitrogen in the cover crop when it is incorporated have been used to get a rough estimate. A new tool is being developed to predict available nitrogen from the cover crop based on the above ground biomass of the cover crop and cover crop quality (percent nitrogen, carbohydrates, cellulose and lignin) along with soil temperature and moisture from nearby weather stations. The Cover Crop Nitrogen Availability Calculator has been tested in several research and farm settings. Results indicate that the Calculator can be used to modify nitrogen fertilizer management without sacrificing yields.

Cover crops are an essential part of fertility management at JRH Grain Farms. The farm regularly uses cover crop mixtures to build soil, suppress weeds, and keep nutrient available to cash crops. For example, a mixture of grains is used before a soybean crop. Nutrient cycling can be one of the toughest things for a farmer to predict, but with patience and practice, you develop an eye for watching cover crops breakdown and estimating the release to the cash crop. AT JRH Grain Farms, we start with taking biomass samples before termination and sending these off for nutrient analysis. We plan on 50% of the nitrogen and 75% of the phosphorus and potassium being released during to growing season to the cash crop. If we are taking a nutrient credit, we follow up with a plant tissue test during the growing season and in corn, we use a Stalk Nitrate tissue test after black layer to confirm our changes in fertility management.

Cover crops play an important role in fertility management on the farm by scavenging nitrogen that would otherwise be lost to the system and in the case of legumes fixing additional nitrogen. Maximizing biomass is key in obtaining the most nitrogen from the cover crop. Timely planting, termination as late as practical as well as treating the cover crop similar to a cash crop will help maximize biomass. There are a number of factors that affect nitrogen release to the cash crop. Soil sampling, measuring cover crop biomass and quality, as well as tissue sampling in cash crops can help farmers better manage this important fertility resource.