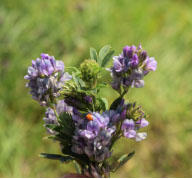 Over the past century, agriculture on the Texas High Plains has evolved into a $20 billion-plus industry centered largely on cotton and finishing beef cattle in feedlots.

Agriculture was made possible with fertile soils, cheap energy and fertilizers, and irrigation water from the Ogallala Aquifer – a crucial, but finite resource deep below the soil surface stretching from South Dakota to the Texas Panhandle.

With energy and other resource costs rising, and water declining in the Ogallala Aquifer, farmers are at a crossroads: Continue current unsustainable practices, or make cropping choices that conserve energy, improve soil and prolong the use of water remaining in the Ogallala.

Taking a “systems research” approach, Texas Tech University researchers –backed by over a decade of producer-driven field studies — have compared cotton monoculture to diversified crop/livestock systems. What they have found isthat systems based on or inclusive of forages and livestock require less water for irrigation and livestock use than systems based entirely on row crops.

Research continues at the Texas Tech New Deal Research Station with field trials pertaining to the integration of forages and livestock into a predominant rowcrop region as a means of reducing water extraction from the Ogallala Aquifer, building soil organic matter, stabilizing soil from wind erosion, and diversifying income.

Following severe drought in the Texas High Plains in 2o11 and 2012 and pasture recovery in 2013, grazing trials were restarted in 2014. A basic steer grazing trial was conducted from 2014-2016 comparing a grass-only system of Old World Bluestem (OWB) receiving nitrogen fertilizer to an alternative (and hypothetically more sustainable) grass/legume system for animal productivity and water use efficiency.

The study also included grazing some native and teff pastures, but were used in minor amounts and didn’t have an overall impact on the results.