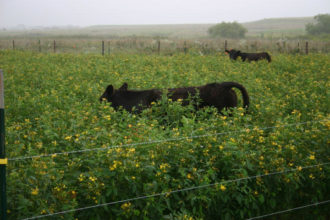 Cover crops are an important component of conservation agricultural systems in the Southeastern U.S. For some producers with extensive experience using cover crops, grazing can be a ‘next step’ in obtaining additional economic value while achieving environmental stewardship. This workshop covered the fundamentals of forage value of annual cover crops, timing of grazing, method of grazing to obtain best utilization, balance between forage quantity and quality, impacts on soil, and whole-farm production. Balancing production and environmental quality is needed in any agricultural system. Potential benefits from grazing cover crops can be immediate from livestock gain, but also from long-term productivity enhancement of following crops. Soil organic matter can be stabilized or enhanced with repeated grazing of cover crops if mindful of managing residual herbage mass. Nutrient cycling can be altered in both positive and negative manners in grazed cover cropping systems. Utilization of small grains as a dual crop for forage and grain is a key system in the Southern Great Plains. Challenges for land managers to develop integrated crop-livestock systems are explored.

“A cover crop is a plant that is used primarily to slow erosion, improve soil health, enhance water availability, smother weeds, help control pests and diseases, increase biodiversity and bring other benefits to your farm” (USDA-SARE). Can we do all that and still get extra benefits from grazing? Yes, as long as grazing is managed correctly!

From a study in Florida, grazing of winter cover crops led to acceptable animal performance and excellent animal gain per acre.

In a summary of a 7-year trial in north Georgia, summer grain crops (sorghum, corn, soybean) were sometimes inhibited by spring grazing of winter cover crops, but winter wheat was unaffected by grazing of summer cover crops. During early years, both rye and pearl millet cover crops were enhanced with no-tillage compared with conventional-tillage management. However during later years, clover/rye and ryegrass/rye mixtures produced lower biomass with no tillage than with conventional tillage. Based on the last year of evaluation, crops under long-term no tillage had greater yields than crops managed under first-year no tillage.

Impacts of Grazing on Soil Compaction

Cover crops (winter or summer) can provide high-quality forage and increase economic return and farm diversity, but farmers have been reluctant to take this advantage due to perceived “compaction” caused by animal trampling. In the 7-year trial in north Georgia, an increase in soil bulk density due to cattle grazing of cover crops was only occasionally detected. Greater soil penetration resistance under wet soil conditions occurred at a depth of 4-8” when cover crops were grazed rather than ungrazed. No differences were detected under dry soil conditions. Similarly negative results were observed for water infiltration, i.e. slower water infiltration under wet soil conditions of grazed cover crops and no difference between grazed and ungrazed condition under dry soil conditions.

Rotation of crops following long-term pasture can be highly effective in limiting (or avoiding) compaction with grazing cattle by maintaining the soil organic matter-enriched surface condition through subsequent no-tillage management.

Plants couple carbon and nitrogen into organic compounds through the process of photosynthesis. Rumen microbes decouple carbon and nitrogen and other nutrients by releasing carbon dioxide and methane and leaving behind available nitrogen in dung and urine. Rumen processing is much faster than natural processes doing the same in soil, and therefore, nutrient availability to crops is enhanced with grazing.

Grazing of cover crops can reduce the quantity of surface crop residues, but this is often reflected in greater nutrient availability from residues transformed through cattle via animal manure. Grazing of cover crops did not have a negative effect on soil organic carbon and nitrogen, but did positively impact soil microbial biomass.

Wheat is a dual purpose crop in the Southern Great Plains. Wheat is planted in September for dual-purpose and in October for grain only. Early planting is possible due to limited Hessian fly pressure in Oklahoma. Duster and Gallagher are two good varieties for grazing. Grazing of wheat typically occurs from December 1 to March 15 (or development of first hollow stem). Animal performance is expected to be 2 lb gain/day in Oklahoma. For more information on grazing wheat in Oklahoma, see PSS-2157.

Graze-out of wheat refers to the practice of grazing cattle until May instead of removing them at first hollow stem. The cattle gains achieved during this time replace the income lost from having no wheat grain harvest. This graze-out option offers a good opportunity for planting summer cover crops that can be grazed, because summer covers can be planted in May and accumulates forage mass before excess heat and drought conditions start in July and August. A key is to be able to graze relatively quickly to prepare ground for the next fall-sown crop. This continuous cropping strategy may provide some of the benefits of more diverse crop rotations, despite that it relies on yearly production of wheat. Some typical summer crop selections have been sorghum-sudangrass, and cowpea, mungbean, and millets. Utilization of crabgrass as summer forage in a graze-out wheat system is also common. Producers can spray crabgrass for broadleaves and/or fertilize to optimize forage yield/nutritive value. Cattle may graze from mid-June to late-July. Crabgrass is often self-reseeding, which reduces cost. Other cool-season forages to consider include wheat, triticale, rye, barley, oat, and various mixtures.

Another system being explored in the more arid western region of the Southern Great Plains is dynamic rotational grazing.

Wheat, triticale, or other cool-season grasses are planted in September and grazed from December to May. Warm-season grasses are then planted any time between May-August depending on rainfall. If planting of this summer forage crop is delayed or fall rainfall is inadequate for planting of the cool season forages, then warm season forages can be planted in early spring the following year. Producers can maintain flexibility based on soil moisture, and therefore, risk can be reduced because they are taking advantage of soil moisture when they have it instead of fixing their production system to specific production seasons.

Integrated crop-livestock systems that are productive and environmentally friendly can be best developed for the warm-moist Southeastern U.S. with (a) no-tillage management to preserve soil organic matter and buffer against animal traffic, (b) strategic stocking of livestock on high-quality cover crops and crop residues, and (c) when starting from high-surface soil organic matter condition following perennial pasture.