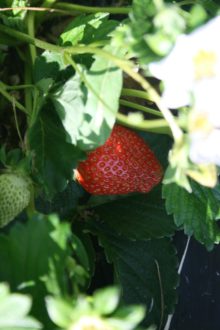 While production practices such as cover crops and compost have been shown to enhance soil health and various crop yields, there are few studies of how these might be used for strawberry production in the Southeastern United States. Over the past 8 years, a team of multidisciplinary faculty and students at NC State University have conducted various field-based studies at the Center for Environmental Farming Systems (CEFS) and on-farm research examining the impact of summer cover crops, compost additions and applications of beneficial arbuscular mycorrhizal fungi and vermicompost on soil health, nutrient availability, and yields in conventional and organic strawberry production systems (McWhirt et al., 2014). Some of the highlighted findings are described in this report.

Summer cover crops and compost were applied to plots prior to planting strawberries in a multi-year research study at the Center for Environmental Farming Systems (CEFS) in Goldsboro, NC in 2013 and 2014. Farm-grade compost was applied at a rate of 3.5 tons/ac (8 tons/ha) in late May or early June of each year using a litter spreader and incorporated with a disk. A mixture of 100 lb/ac of cowpea, (Vigna unguiculata L., var. ‘Iron and Clay’) , and 10 lb/ac of pearl millet (Pennisetum glaucumgenus L. Var. SS035), was planted using a Sukup 2055 No-till Grain Drill the day after compost application. Cowpea seed was inoculated with Graph-EX SA rhizobia cover crop inoculant (proprietary rhizobia species mix), prior to planting. Cover crops were terminated at the end of the first week of August in both years with a flail mower and incorporated into the soil with a disk to approximately 15 cm depth. Termination date was based on timing needed for biomass to break down prior plastic laying and fumigation activities for the subsequent strawberry crop planted in the first week of October.

Compost additions prior to cover crop establishment resulted in lower weed biomass at cover crop termination, which was possibly due to faster cover crop establishment and canopy closure. Compost and cover crops can add significant nutrients that can supply a considerable amount, if not all, of the pre-plant fertilizers recommended for strawberry production. One surprising result is that we found the cover crops to yield higher in the fumigated plots than the non-fumigated plots in year 1. Plants had higher plant tissue N in these plots.

Cover crop and compost plots had higher total soil microbial biomass based on phospholipid-derived fatty acids (PLFA) analysis relative to the control in the fumigated treatment. However, cover crops did not impact other measured indicators of soil health (total % soil organic matter, bulk density, etc.) after 2 years in our study.

Cover crop use for strawberry production was shown in some cases to impact plant tissue nutrient uptake, yields and summer weed suppression. The cost of nitrogen per pound supplied by both cover crops and compost is not competitive with the cost of nitrogen from traditional chemical fertilizers while these synthetic sources are still inexpensive. However these economic comparisons do not include the value of ecosystem services provided following cover crop establishment. Summer cover crops are a good option for small scale strawberry growers in the SE U.S. to diversify their cropping sequence, and provide soil cover during otherwise fallow periods.