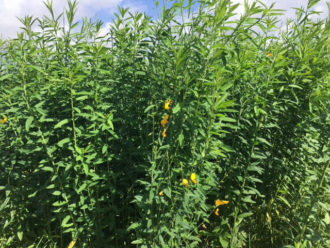 In Alabama, vegetable producers have adopted cover crops in both plasticulture and in no-till systems due to the benefits of cover crops in both systems. At the North Alabama Horticulture Research Center (NAHRC) in Cullman, Alabama, cover crop mixtures including a grass and legume are grown in vegetable production systems in summer and winter. A mixture of cereal rye (Secale cereale), hairy vetch (Vicia villosa), and crimson clover (Trifolium incarnatum) has proven to be an effective winter cover crop mixture. There are vegetable plots at NAHRC where the cover crop has reseeded for five years without replanting. Sunn hemp (Crotalaria juncea) is a popular option as a summer cover crop as it is fast growing and produces large amounts of biomass and nitrogen (N). However, it is more expensive than other cover crops and is susceptible to rhizoctonia. A suitable alternative for sunn hemp is a mixture of iron clay cowpea (Vigna unguiculata) and sunflowers (Helianthus annuus). Sunflowers provide additional economic return as they can be harvested for birdfeed.

While the benefits of cover crops are similar regardless of cash crop, there are a number of benefits that are particularly important to vegetable producers. The main benefits of cover crops in vegetable production include increased organic matter; additional N through the use of legumes; suppressing disease, nematodes, and weeds; reducing soil erosion; providing habitat for beneficial insects; and improving soil tilth.

Strawberry (Fragaria L.) producers in Alabama have recognized the economic benefit of integrating cover crops into their production system to reduce commercial nitrogen use thus reducing production costs. Certain cover crops are more efficient at mining residual nutrients, such as phosphorus (P) and potassium (K). As the cover crop breaks down, these nutrients become available to the cash crop.

When considering a no-till vegetable production system with cover crops, producers should consider the advantages and disadvantages associated with the practice when compared to plasticulture. While many of the benefits are agronomic in nature, they may also provide economic benefits.

One of the main benefits of moving to no-till vegetable production is a reduction in equipment and labor needs compared to plasticulture. While both plasticulture and no-till production require the use of a sprayer and planter or transplanter, producers using plastic require more equipment prior to planting including: at least one pass with a turning plow or chisel plow; at least one pass with a disc or tiller; and one or two passes with a bed shaper and plastic layer depending on the type of equipment. Assuming the use of a cover crop, no-till production requires a pass to terminate the cover crop using a roller/crimper, flail mower, bush hog, tiller, or other equipment.

Additionally, one of the major advantages of a no-till system is not using plastic in production. There are significant labor costs associated with installing plastic and removing it from the field. There are disposal costs after harvest and torn pieces do not rapidly degrade. Furthermore, it is not financially feasible to grow some crops on newly laid plastic.

While there are a number of advantages, there are potential disadvantages of adopting a no-till vegetable production system with a cover crop. It takes time to learn how to properly manage the system. Timing becomes more important since producers must take into account the lower soil temperatures in a no-till system as compared to plastic and the timing of terminating cover crops (at least three weeks prior to planting). Weeds can quickly become a problem in a no-till vegetable system, especially for organic producers. Cover crops, along with an in-row compost strip, help to control weeds in no-till systems. Certain crops, such as tomatoes (Solanum lycopersicum), cucurbits, cole crops (Brassica oleracea), southern peas (Vigna unguiculata), and corn (Zea mays), are better suited for a conservation system (Hoyt et al., 1994).