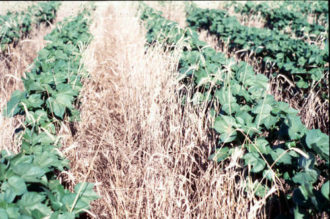 An Introduction to the Economics of Cover Crops

Cover crops are not new to the Southern U.S. The “Old Rotation” in Auburn, Alabama was started in 1896 and is the oldest, continuous cotton (Gossypium hirsutum L.) experiment in the world. One of the objectives was to test the effect of winter legumes in cotton production. In 1978, researchers and producers gathered in Georgia for the 1st Annual No-till Systems Conference; however, they did not talk only about no-till. They discussed the role of related practices, such as cover crops, in conserving moisture and reducing erosion, as well as the financial benefit to adopting cover crops (Touchton and Cummins, 1978).

For the first time, in the 2012 Census of Agriculture, producers were asked, considering the total acres on their operation, how many cropland acres were planted to a cover crop (excluding CRP acres). Across the Southern SARE region, cover crop acres as a percent of total cropland acres ranged from 1.3% in Mississippi to over 10% in Virginia (USDA-NASS, 2016). Differences between states depend on crops grown by producers, climatic differences, and challenges faced by producers.

There are real and perceived agronomic and economic challenges to adopting cover crops. Producers are concerned about the time and labor required for planting and managing cover crops, as well as the cost of planting and managing the cover crops. Seed costs are routinely identified as a challenge to adopting cover crops. There is concern that the use of cover crops increases overall crop production risk and has the potential to reduce yield in the following cash crop. There may be a learning curve for producers who have never worked with high residue cover crops and/or have limited experience with conservation tillage and/or cover crops. Researchers at the USDA-ARS, National Soil Dynamics Laboratory (NSDL) in Auburn, Alabama and at the University of Georgia—Tifton have past and current research that addresses the challenges faced by producers.

Researchers at the USDA-ARS, NSDL are developing conservation systems that will maximize benefits through the production of a high residue cover crop that is intensively managed while minimizing associated production costs. Ongoing research includes investigating methods of combining operations, cover crop establishment (planting date and seeding and fertilizer rates), and the use of mixtures. Additional information about past and current research at the USDA-ARS, NSDL, please visit https://www.ars.usda.gov/sea/nsdl.

Cover Crop Economics: A Glance at Research in Georgia

Cover crops are an important part of an organic production system; however, organic cover crop seed is difficult to source for many producers. To help determine if organic cover crop seed production was a viable option in Georgia, researchers developed organic cover crop seed budgets (Gaskin et al., 2014) and related guidance. They conducted two separate two-year on-farm trials with cereal rye (Secale cereale L.) and crimson clover (Trifolium incarnatum L.). They included the cost of the seed, fertilizer, fuel and lube, repair and maintenance on equipment, labor, as well as hauling and cleaning of the seed. They concluded that, based on their assumptions, cereal rye yields of greater than 17 bu/acre, sold at $36/bu, and crimson clover yields of at least 150 lbs/acre, sold at $2/lb could be profitable. It is important to understand that marketing certified organic cover crop seed is new in Georgia, and no convenient markets have been established. Producers wanting to sell seed should secure a market prior to planting to help reduce price variability. Secondly, costs will vary with pest pressure, weather, and equipment. Finally, organic cover crop seed production is labor intensive, which may limit producers’ ability to grow it on a large scale.

Organic and traditional producers are interested in using cover crops to reduce fertilizer inputs since cover crops and fertilizer impact profitability. Research was conducted to determine how cover crops and supplemental nitrogen impacted cotton profitability. In Tifton, Georgia, a two-year experiment was conducted in an irrigated cotton production system with five cover crop treatments: crimson clover, hairy vetch (Vicia villosa), cereal rye, wheat (Triticum aestivum L.), and a no cover crop. Four fertilizer treatments (0, 30, 60, and 90 lb N/ac) were then compared following each cover crop treatment. Results showed that cotton following hairy vetch appeared to have the most profit potential. There was no profitability advantage of a grass cover crop over the no cover crop control; however, benefits like reduced soil erosion should still be considered. Cotton following a legume cover crop may allow for reduced sidedress N applications.

Farmers in Georgia plant cover crops to help reduce soil erosion; however different tillage systems may cause more rapid decomposition of cover crops. Research was conducted to determine how covers crops and tillage impact profitability in Tifton, Georgia in a cotton production system with two types of tillage (conventional and reduced tillage), and four cover types (crimson clover, cereal rye, wheat, and a no cover control). Results showed that total costs were higher for conventional tillage treatments and for cover crop treatments. Averaged over the two years, there was no statistical difference between cover crop treatments.

While cotton is a major crop in the Southeast, peanut (Arachis hypogaea L.) are also an important regional commodity. Nutrient management is critical for peanut, and, with nutrient price volatility, questions were raised regarding the option to incorporate cover crops into peanut production systems to provide nutrients. Research was conducted to assess the effect of cover crops on peanut yield, costs of production, and revenue in Tifton, Georgia. The experiment consisted of three cover crops (crimson clover, cereal rye, and wheat) and two tillage systems (strip-till and conventional tillage). Systems with crimson clover had higher total costs than cereal rye and conventional tillage had higher total costs than strip-tillage. Peanut appeared to do better following a grass cover crop than a legume cover crop.

In Georgia, cover crops are an important conservation practice for producers. For producers interested in producing cover crop seeds having a market for the seed is vital. Cover crops have a cost, but more often than not, the benefits outweigh the costs. It is essential to consider the benefits, such as improvements to soil and reduced erosion, that are difficult to monetize. For more information on extension and outreach related to agricultural and applied economics at UGA-Tifton, visit https://www.caes.uga.edu/departments/agecon/extension.

Working with NRCS to Develop Good Recommendations for Planning and Contracts

For many producers, participating in federal conservation programs have helped them to adopt cover crops and other conservation practices on their operations. There are five steps to getting assistance from NRCS for producers: 1.) Visit your local NRCS field office to discuss the goals and work with staff on a conservation plan; 2.) With the help of NRCS, complete an application for financial assistance, which can be completed online through the Conservation Client Gateway; 3.) As part of applying, NRCS will file paperwork to ensure you are eligible for assistance; 4.) NRCS will rank applications according to local resource concerns; and 5.) Put conservation to work by signing a contract and implementing conservation practices.

For a successful conservation cover crop management specifications, planners and producers should identify and understand 1.) the primary resource concern specific to the operation; 2.) the objectives; 3.) current cropping/tillage system; 4.) level of expertise, management capabilities, and commitment to adopting cover crops; 5.) the appropriate cover crops to address the resource concerns and meet the objectives; and 6.) the planning site.

Producers interested in establishing cover crops with assistance from USDA-NRCS should contact their local NRCS field office to learn more about opportunities in their county and state. More information about USDA-NRCS is available at https://www.nrcs.usda.gov.

Myron Johnson, a dryland crop farmer from Henry County, Alabama, relies heavily on cover crops on his small grain, cotton, and peanut farm. He adopted cover crops to reduce soil erosion, increase soil organic matter, and increase water holding capacity on his operation. He grows primarily cereal rye as a cover crop due to the amount of biomass it produces; however, he recently planted cover crops mixtures to see how they will perform on his operation compared to cereal rye. Myron overcame the challenges of adopting a conservation system with cover crops and plans to continue to utilize this system into the future.