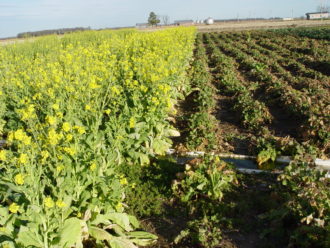 Cover crops can be used to provide weed suppression in subsequent cash crops. In the Southeastern and Mid-South U.S., questions concerning management of herbicide-resistant Amaranthus species, horseweed, and Italian ryegrass, comprise the majority of Cooperative Extension Service calls. Conservation agriculture practices are especially threatened by the emergence and rapid spread of glyphosate-resistant Palmer amaranth. The use of cover crops for weed control can help conventional producers combat herbicide-resistant weeds and organic producers reduce dependency on cultivation as their primary weed control mechanism. When using cover crops for weed control, cover crops are often terminated via roller-crimping that leaves a weed-suppressive mulch on the soil surface into which the cash crop can be directly planted. A roller-crimper terminates weeds by rolling the cover crop down at an appropriate growth stage and simultaneously crimping the cover crop stems which accelerates desiccation. A surface mulch can reduce weed pressure through physical impedance, depriving weeds of light, and through allelopathy. A key to successful weed control when using this system is to achieve high cover crop biomass. Cereal rye (Secale cereale) is a popular cover crop choice in this system for its ability to produce a large quantity of biomass. Cereal rye can be easily terminated via roller-crimping at soft dough stage. However, planting into a high cover crop biomass mulch can be a challenge. Conventional producers can use strip-till rigs, which will move the cover crop residue several inches away from the crop row and allow for good cash crop seed-to-soil contact. Non-organic producers can then affordably use a banded herbicide application to control in-row weeds. For an organic producer, it is important to keep as much cover crop residue in the crop row as possible due to lack of affordable and effective in-row weed control options. Researchers and producers have been working on planter designs which can plant reliably and efficiently into heavy cover crop biomass mulches.

Field experiments were conducted from autumn of 2003 through cash crop harvest in 2006 at three locations. The treatments were five cover crop seeding dates each autumn and four cover crop termination dates each spring. The five crimson clover or cereal rye seeding dates were: on the first average 32○ F temperature date, two and four weeks prior and two and four weeks after the average 0○ C temperature date. Termination dates were four, three, two, and one week prior to the average date for the establishment of the cash crop.

Results showed that biomass production by winter covers decreased with even a week’s delay in winter cover crop seeding and resulted in a corresponding increase in summer annual weed biomass. More than ten times difference in clover biomass was observed when clover was planted on the earliest date and terminated on last date compared to late planting and early termination. Correspondingly, weed biomass was 496 lb/ac in the treatment with the least rye biomass, which was eight times higher than the treatment with the greatest rye biomass.

In this experiment, earlier cover crop planting and leaving cover crops alive up to one week before planting corn and cotton increased cover crop biomass accumulation compared with planting later and terminating the cover crop four weeks before planting. Increased cover crop biomass suppressed subsequent total weed dry biomass. These findings indicate that high residue cover crops have predictable potential for suppressing early season weeds in corn and cotton. If farmers are utilizing glyphosate-resistant corn-cotton rotation systems these findings hold particular importance with regard to current glyphosate resistant weed control issues. Because corn and cotton yields were not negatively impacted, we can conclude that high residue obtained by planting crimson clover or rye cover crops timely and terminating either a week or two prior to cash crop planting is feasible assuming soil moisture is not limiting at this time. Ideal management will result in maximum cover crop biomass production that provides effective weed suppression.