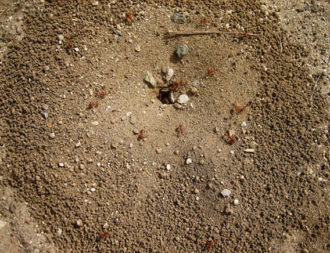 Investigating soil biology is a wild, unpredictable zoological ride. From the smallest organisms on Earth (viruses) to earthworms, cover crop selection and management is affected by and influences soil biology in ways we cannot completely predict.

Soil organisms inhabit the most complicated ecosystem on Earth, often characterized as a black box, because there is much we still do not understand about what happens in the soil environment to cause the changes we see. A huge diversity of soil organisms exists partly because of how minerals, organic matter, aggregates, and pore space are put together and the fluctuations that occur as soils wet and dry; freeze and thaw. The major categories of soil organisms include viruses, bacteria, fungi, protozoa, nematodes, microarthropods, macroarthropods, and earthworms. They form a complicated web of interactions—affecting one group affects them all. Viruses are obligate intracellular parasites; they regulate microbial populations. Bacteria and fungi are biochemical engineers of soil that convert plant material and minerals into nutrients and carbon that make up the primary resource base for all soil life. Protozoa, nematodes, and microarthropods consume the bacteria and fungi. Larger nematodes and arthropods consume these smaller predators, fragment plant debris to make it available to decomposition, and in turn are the prey of other soil predators like beetles and spiders. Ants, termites, and earthworms are often called soil bioengineers because they mix plant material, dead organisms, and other soil organic matter to make it available once more to the primary decomposers—the bacteria and fungi.

The Challenges of Monitoring Soil Organisms

We use different ways to monitor soil organisms depending on how big and where the organisms are. Each method has its biases and limitations. If the organism is big enough (e.g. beetles, worms) we can extract them directly from soil, but this can be destructive. We can look for compounds, like phospholipids, that are diagnostic of different microbial groups (but often not). We can culture microorganisms on solid media, but this is selective, and we know that less than 1% of soil microorganisms can be isolated this way. We can characterize populations in soil by the substrates on which they grow (community level substrate profiling) – if they grow. We can use molecular methods and extract the total DNA from soil to look for specific genetic sequences. But this doesn’t tell us which organisms are active at a given time.

Can you manage soil biology with crops? Yes. For example, compared to a monoculture of tall fescue, there were more earthworms in buffer strips that had a mixture of herbaceous weeds. We do it all the time with leguminous plants and mycorrhizae. Nodulated legume cover crops colonized by rhizobia clearly add fixed nitrogen to soil. An added benefit is the legumes cover crops appear to also improve plant phosphorus nutrition.

The added phosphorus partly comes from better crop growth and root development. But it is also because different crop species have different potential to become colonized by obligate fungal symbionts called arbuscular mycorrhizal fungi (AM fungi). These mycorrhizae increase the root surface area, longevity, and the volume of soil that can be exploited, so they assist crop growth. Mycorrhizae also improve nutrient uptake, soil structure, and disease resistance.

AM mycorrhizae reproduce by spores, and there is a good relationship between the number of spores a mycorrhizal plant forms and the extent of colonization (Table 2). Rotations using good mycorrhizal hosts such as grains or legumes are beneficial. Rotations with cover crop in the Brassica family that are not mycorrhizae hosts may decrease subsequent colonization.

Mixtures of cover crop species can increase and decrease functionality (substrate type and use) in the rhizosphere of individual species in the mix. The downside of this observation is that microbial diversity as a goal of crop management does not guarantee the outcome will be functional or process diversity. Simply summing the pure functional profiles of individual organisms does not predict the functional profile of a mixed community of these organisms added back to the soil. Adding organisms to soil because they can perform a particular function does not ensure the soil will perform that function. While we may be able to manage cover crop symbionts, we are still not able to specifically manage the biology of their PGPR.