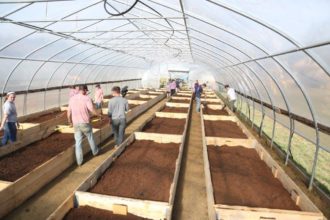 The Virginia’s craft brewing industry is bubbling – 58 breweries in 2013 – 103 today. The beverage industry and Asian restaurants both value locally sourced ginger. While a great deal is known about growing this tropical in the warmer eastern coastal plains, Virginia’s Piedmont farmers cannot access these markets. On a December morning, it’s 27 degrees and frost is making the Blue Ridge Mountains silver, but in a high tunnel beside the packing shed on Riverstone Organic Farm in Floyd, Virginia, it’s the tropics. Inside, Riverstone owner, Woody Crenshaw, with the help of a two-year SARE Producer Grant, has built, covered, and heated, a low-tech system of raised beds to explore the possibilities of growing ginger in the mountains of southwest Virginia. This SARE project documents the profitability of growing organic baby ginger from certification all the way to value-added production.