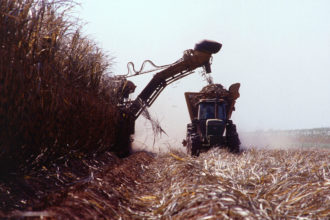 HOUMA, Louisiana – When it comes to profitable sugarcane, the goal of every grower is to achieve the highest possible sucrose yield at the lowest production cost possible.

Sugarcane yields correlate with nitrogen application, and as producers continue to get squeezed between decreasing acreage and higher input costs, such as fertilization, they are looking for ways to boost their operational efficiency while maximizing yields and limiting impacts on the environment.

Vegetation indices, such as Normative Difference Vegetation Index (NDVI), measure the overall health of a plant by capturing the various wavelengths of light that plants either absorb or reflect. The higher the index, on a scale of 0 to 1.0, the healthier the plant.

“Healthy plants absorb red and blue bands of light while reflecting away most of the near infrared light,” said McCollam. “The healthier a plant is, that is, the more photosynthesis it carries out, the more red light it tends to absorb. An unhealthy plant absorbs less red light while reflecting away less near infrared, and, subsequently, the ability to photosynthesize and produce sugar is diminished.”

McCollam also analyzed various aerial methods of capturing the data, including drones, balloons and kites. He found that using a drone along with a Sequoia multispectral camera was the most cost-effective method of capturing field data.

Data analyses showed that the sugarcane maximized its yield potential at 120 pounds of nitrogen per acre, and that yields could be predicted at 100 days following treatment with nitrogen. The most ideal vegetation index to use was NDVI.

“Our results indicate that sucrose yield was significantly improved by increased nitrogen fertilizer application. Compared to the control, the yields under 40, 80, 120 and 180 pounds of N/acre were 45%, 50%, 62%, and 55% higher, respectively,” said McCollam. “At the start of the season there was a low NDVI correlation (.39) among all treatments and sucrose yields. As the season progressed, the correlation score rose and at the height of the growing season the value peaked at .97 before declining as the crop neared maturation and harvest.”

McCollam said the technology may allow farmers the ability to quickly and accurately assess nitrogen placement in the field to estimate yield potential while keeping overall input costs low by adjusting nitrogen management only when necessary.

“The methods and equipment used are readily available to anyone and can be applied in ways that do not impose a high barrier in terms of time and materials,” said McCollam. “Farmers are practical regarding the kinds of tools they are willing to try and are eager to learn a new method if it helps solve a long-standing problem more efficiently.”

Published by the Southern Region of the Sustainable Agriculture Research and Education (SARE) program. Funded by the USDA National Institute of Food and Agriculture (NIFA), Southern SARE operates under cooperative agreements with the University of Georgia, Fort Valley State University, and the Kerr Center for Sustainable Agriculture to offer competitive grants to advance sustainable agriculture in America’s Southern region. This material is based upon work that is supported by the National Institute of Food and Agriculture, U.S. Department of Agriculture, through Southern Sustainable Agriculture Research and Education, under sub-award number: FS14-282. USDA is an equal opportunity employer and service provider. Any opinions, findings, conclusions, or recommendations expressed in this publication are those of the author(s) and do not necessarily reflect the view of the U.S. Department of Agriculture.