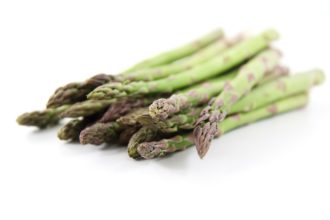 LYFORD, Texas — A south Texas producer, interested in increasing the diversity of crop production for local farmers, has found that asparagus can be grown in the Texas heat practically year-round by mimicking the “die-back” that occurs in the plants during dormancy in colder climates.

With a Southern Sustainable Agriculture Research & Education (SSARE) Producer Grant, Gilbert Garza with the Texas/Mexico Border Coalition, cut asparagus ferns below the soil surface every 10 months during the two-year trial, then pruned the ferns back every two months and harvested the spears to extend and maintain a continuous production of asparagus. The result: an asparagus crop that is viable for 10 months out of the year, with only two or three months of low production.

“Asparagus is not typically grown commercially in the South because of hot weather conditions and a limited harvest season,” said Garza. “This research showed that asparagus harvest in South Texas, and other warm areas in the region, can provide near year-round production.” In addition, Garza discovered that asparagus production can have two distinct seasons: a primary season that peaks from March through May, and a secondary season that peaks September through November.  Low production months include January and August.

Garza added that the crop was grown organically. No insecticides or herbicides were used during the project, and when the asparagus ferns were cut back, the only fertilization used was a two-inch layer of compost spread on the beds.

“Using this organic cultivation method, asparagus has the potential to be a successful alternative crop for small-scale producers in the South,” said Garza.

But while the research results challenge the common perception that warm conditions are not appropriate for asparagus commercial production, Garza emphasized that the 28-month research project did not continue long enough to determine the longer-term effects of a hot sub-tropical climate on asparagus production and plant longevity. More research is needed, he said.

Published by the Southern Region of the Sustainable Agriculture Research and Education (SARE) program. Funded by the USDA National Institute of Food and Agriculture (NIFA), Southern SARE operates under cooperative agreements with the University of Georgia, Fort Valley State University, and the Kerr Center for Sustainable Agriculture to offer competitive grants to advance sustainable agriculture in America’s Southern region. This material is based upon work that is supported by the National Institute of Food and Agriculture, U.S. Department of Agriculture, through Southern Sustainable Agriculture Research and Education, under sub-award number: FS14-281. USDA is an equal opportunity employer and service provider. Any opinions, findings, conclusions, or recommendations expressed in this publication are those of the author(s) and do not necessarily reflect the view of the U.S. Department of Agriculture.