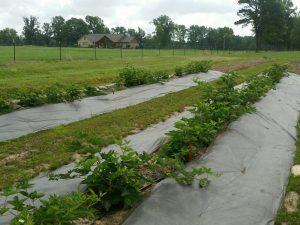 SEARCY, Arkansas – Primocane blackberries, which can extend the fruiting season by months over traditional plant varieties, are changing the way farmers are growing berries. But they don’t come without their pest and production challenges, which University of Arkansas researchers are trying to solve with a naturally occurring soil mineral.

“Interest has been growing in using primocane-fruiting types to provide berries at a time of year when market prices are at a peak,” said Sherri Sanders, a University of Arkansas County Extension agent. “But there is little information available on managing diseases and insect pests on plants that are fruiting during a time of the year when more traditional floricane-fruiting varieties are not.”

Primocane blackberry varieties have the potential to produce two crops in a single year.

“In theory, you can get fruit until frost, and extend your marketing period beyond the traditional 4-6 weeks to 6 months or more,” said University of Arkansas horticulturist John Clark. 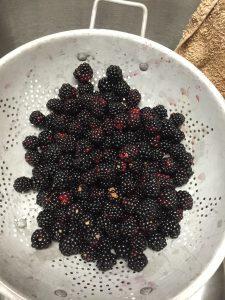 But with the advantages of primocane production comes some drawbacks. Plants fruiting later in the season are exposed to a variety of insect pests, such as strawberry clipper, rednecked cane borer, spotted wing Drosophila, stink bugs, broad mites, Japanese beetle, and raspberry crown borer. In addition, high summer temperatures can have a negative impact on primocane-produced fruit production and quality.

Kaolin clay is a naturally occurring mineral that is touted for its pest repellant features and its ability to reduce sunburn on crops. Products, such as Surround®, are applied as a whitewash to the plants during the growing season.

In the research project, experiments at all three farm sites included randomized complete blocks with four replications of each of the following treatments: 1) Surround WP® applied weekly during July-September; 2) Surround WP® applied weekly plus conventional integrated pest management practices; 3) No Surround WP® but used conventional integrated pest management practices, and 4) No Surround WP® and no disease or insect control. Leaf temperatures were monitored in all plots throughout the season. In addition, plots were monitored for spotted wing Drosophila, broad mites, spider mites and stink bugs, and weekly inspections and severity ratings were made for anthracnose, cane blight, rosette, or other diseases.

University of Arkansas entomologist Donn Johnson said that they are still collecting field data and assessing the effectiveness of the kaolin clay whitewash on pest control. But researchers found that the leaf temperatures “do not change a whole lot with the whitewash application.” At each farm location, temperatures in the plant canopy were 1.2 degrees Fahrenheit cooler than ambient air temperatures.

Researchers still have another year of the 3-year research project. The potential use of kaolin clay on primocane blackberries not only depends on the success of the research project, but also on consumer acceptability of the whitewash on the fruit, said Sanders.

“Folks may not want to wash blackberries with white speckles on them,” said Sanders, although she noted it doesn’t seem to bother consumers to wash apples that have been applied with the mineral particle.

One of the final pieces of the research project will be to use budget tools to estimate the potential economic returns associated with the use of mineral particle film within the production management strategies.

Published by the Southern Region of the Sustainable Agriculture Research and Education (SARE) program. Funded by the USDA National Institute of Food and Agriculture (NIFA), Southern SARE operates under cooperative agreements with the University of Georgia, Fort Valley State University, and the Kerr Center for Sustainable Agriculture to offer competitive grants to advance sustainable agriculture in America’s Southern region. This material is based upon work that is supported by the National Institute of Food and Agriculture, U.S. Department of Agriculture, through Southern Sustainable Agriculture Research and Education, under sub-award number: LS16-274. USDA is an equal opportunity employer and service provider. Any opinions, findings, conclusions, or recommendations expressed in this publication are those of the author(s) and do not necessarily reflect the view of the U.S. Department of Agriculture.