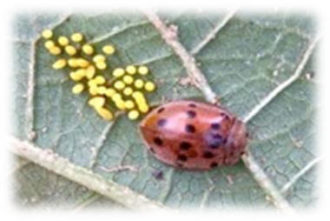 BLACKSBURG, Virginia – Reflective plastic mulches, such as silver (metalized) or white, significantly reduces populations of Mexican bean beetles on snap beans, while significantly increasing yields, according to the results of a Virginia Tech study.

Mexican bean beetle (Epilachna varivestis Mulsant) is a serious pest of snap bean varieties, causing injury by feeding on the leaves and pods and increasing the chances of diseases while making the pods unmarketable. Researchers at Virginia Tech have taken a special interest in finding sustainable methods for controlling the insect; snap beans are an important fresh market crop in the state, with over 5,500 acres grown.

“Currently, the only alternative, non-chemical method for managing Mexican bean beetle is a parasitoid wasp, which is effective. But it is expensive to obtain and it cannot survive winters,” said Kuhar. “We believe that our research will provide additional options to bean growers who are interested in integrated pest management (IPM).”

In the study (GS13-120), “Management of Mexican Bean Beetle in Snap Beans Using Cultural Control Strategies,” one of the cultural control methods evaluated was reflective plastic mulches. Previous research has shown that Mexican bean beetles shy away from direct sunlight and survival rates decrease as light intensity and temperatures increase. The researchers planted ‘Dragon’s Tongue’ snap beans (a variety determined to be highly susceptible to Mexican bean beetle) in replicated plots of bare soil, black plastic mulch, white plastic mulch and metalized plastic mulch. All plants were visually searched once a week for a month during the summers of 2014 and 2015, and all stages of the Mexican bean beetle were documented, along with any damage that was observed.

Results revealed that silver (metalized) plastic mulches performed the best in reducing pest populations and plant damage, followed by white mulch. Black plastic and bare ground harbored relatively high numbers of the pest in all life stages. In addition, the metalized mulch produced significantly greater pod yields than all the other treatments – over double that of bare soil plots.

“Overall, metalized plots harbored very few Mexican bean beetle adults, eggs and late larvae compared to all other treatments, and plant and pod damage was consistently lower in metalized plots,” said Kuhar. “It is also important to note that more of these pods were marketable, as they were cleaner from being on plastic instead of bare soil.”

“Metalized plastic mulch is roughly $45 for 200 feet, compared to black plastic, which can be purchased for about $30 at that length. We have shown that growers can over double their yield by planting beans on metalized plastic instead of bare soil, which that alone will quickly offset the cost of the mulch,” said Kuhar. “Also, mulch should reduce costs associated with insecticides, herbicides, and reduced unmarketable pods cause by pathogens obtained from soil contact. Growers can also choose to plant a second crop, such as lettuce, on the same plastic and receive similar benefits in yield, weed control, and cleanliness.”

Complete results of the study can be found in the final report.

Published by the Southern Region of the Sustainable Agriculture Research and Education (SARE) program. Funded by the USDA National Institute of Food and Agriculture (NIFA), Southern SARE operates under cooperative agreements with the University of Georgia, Fort Valley State University, and the Kerr Center for Sustainable Agriculture to offer competitive grants to advance sustainable agriculture in America’s Southern region. This material is based upon work that is supported by the National Institute of Food and Agriculture, U.S. Department of Agriculture, through Southern Sustainable Agriculture Research and Education, under sub-award number: GS13-120. USDA is an equal opportunity employer and service provider. Any opinions, findings, conclusions, or recommendations expressed in this publication are those of the author(s) and do not necessarily reflect the view of the U.S. Department of Agriculture.