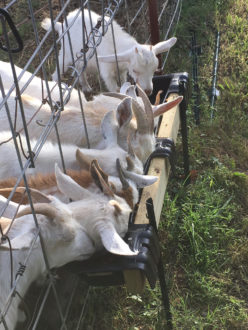 PROSPECT, Tennessee – Jo Ann Harris calls out to a flock of Dorper sheep in a pasture:  “Sheeep. C’mere sheep.” Almost immediately the animals come running to her side, head bumping her leg and begging for a head scratch before moving on to the food pellets Harris has laid out for them in containers.

With black faces and friendly dispositions and perhaps too plump for their own good, the sheep are downright cute. And that’s the type of agricultural animal many of Harris’ customers are looking for. Harris, along with her husband, breed and sell sheep and goats as hobby livestock; the excess they take to market.

“When we bought this property back in 2010, my husband wanted to get into raising cattle. Wouldn’t it be great, he told me, to look out our kitchen window and watch our animals on the rolling hillsides?” recalls Harris. “But we didn’t know anything about raising cattle. And when I saw a post on Craigslist for goats, we thought it would be easier to manage a smaller animal, and so that’s what we went with.”

Turns out, the couple didn’t know much about raising small ruminants either. In fact, they were brand new to farming when they moved from the suburbs of Huntsville, AL to 50 acres of pasture, woods and hills in rural Tennessee just across the Alabama border. And they quickly discovered how devastating gastrointestinal worms (Haemonchus contortus) can be for sheep and goats.

“We started out with two goats and when one of them died, we were shocked to learn it was from worms. It was completely new to us,” said Harris. “That’s when we started using sustainable farming practices to control parasitic infections: FAMACHA scoring, rotational grazing, administering copper as a bolus.”

The Harris’ were facing the same problems most small ruminant producers face: It’s hard to raise a flock if you can’t get the parasites under control.

It All Began with a Chicken

The Harris’ journey into agriculture began in the suburbs of Huntsville with a chicken.

“I went in the garage to get a shovel and saw our cat playing with something. When I investigated, I saw it had a baby bird of some sort,” said Harris, unsure of where it came from. “I spent the night researching on the Internet what majestic raptor it was going to turn into.” She laughs at her own inexperience at the time.

Her family kept the chicken and got a few more. Later, their desire to escape the city and spend weekends in the woods led them to Prospect, TN, a rural community roughly 30 miles north of Huntsville. Eventually the weekend getaways turned into a permanent residence. Harris, a data analyst; her husband, an engineer; and their two daughters moved, restoring the old 1890s farm house on the property, building a barn and tending to the livestock they’ve grown to care so deeply for. The chickens made the trip with them. The farm now had a name: Harris Sheep Station.

“It’s super hard,” said Harris, of juggling agricultural duties with a full-time job. “We’ve got about an hour of morning chores, a 45-minute commute to work, then back home and another several hours of chores on the farm.” 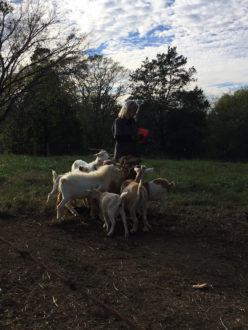 But that doesn’t stop Harris from remaining deeply committed to the farm, the animals, and the small ruminant community. She’s an active member of the Mid South Regional Dorper Association, and feels for the plight of the small ruminant producers in their fight to keep their flocks healthy and worm-free.

“Anthelmintics are becoming less and less effective as a whole as the worms are becoming more resistant to treatments. As some producers use treatments on whole flocks or herds, treating every animal, more as a preventive measure (whether their animals have worms or not), that resistance is only going to get worse. We are suffering from our own making,” said Harris. “And the pharmaceutical industry is not putting the money into research for new classes of anthelmintics.”

There is a great need for new control strategies, and Harris, through a Southern Sustainable Agriculture Research & Education (SSARE) Producer Grant project, is pecking at a solution.

The year 2016 was a curse and a blessing for the Harris family. The farm lost half of its Dorper lambs to gastrointestinal parasites. But it was that same year Harris learned about SARE while attending the Alabama Cooperative Extension’s annual Small Ruminant Conference in Orange Beach, AL.

“I wanted to do a study to find out what could be done to reduce the worm populations in my pastures. I wanted to get them out of our fields before the sheep had a chance to even ingest them,” said Harris. “When I learned that SARE offered a grant that would allow me to study my idea, I didn’t hesitate to apply.”

In the Producer Grant project (FS17-297), “Bacillus thuringiensis var. Israelensis as a Larvacidal on a Rotational Grazing System for Ruminants to Combat Haemonchus contortus,” Harris tested the theory that Bt (a naturally occurring microbe that produces proteins that are toxic to insect larvae) sprayed on pasture in between livestock feeding rotations could reduce parasite populations.

“If Bt could kill caterpillar larvae and mosquito larvae, I wondered if it could do the same to parasitic worm larvae,” Harris wondered. “I researched a lot of literature that showed the idea worked in the lab.”

But would it work in the pasture?

For 28 weeks in 2017 through two test phases and four full rotations through a six-paddock field, sheep were feeding on grasses sprayed with Bt. The animals were tagged, weighed, scored and dewormed, and fecal samples were collected after each rotation to measure parasitic egg counts.

“Unfortunately, after three rotations we didn’t find a statistically significant difference between the control and the test treatments,” said Harris. “Maybe the Bt wasn’t sprayed in a high enough concentration or perhaps the application method wasn’t correct. I was so disappointed. I was sure we’d come on to some breakthrough.”

But by the 4th rotation, a curious thing happened. Harris began incorporating the Bt directly into sheep feed: two spoonfuls mixed with water and molasses once daily. “I didn’t have anything to lose,” said Harris. “And I knew that the Bt was safe for animal consumption.”

The result: A reduction of gastrointestinal parasites of 40 percent.

“It was the first time in the study that I saw a statistical difference in the worm counts,” said Harris. “I was really excited to see that it seemed to work.”

But she’s cautious about the results.

“More research still needs to be done in this area to determine if this route is truly effective. Don’t go out and buy Bt to feed to your animals,” said Harris. “We are seeing something, but not sure yet exactly what.”

Harris hopes to continue her work with Bt as a form of biological control in her sheep flock, as well as exploring other avenues of biological control, such as nematode trapping fungi. Such fungi entangle parasites in a web-like structure, then paralyze and consume them. 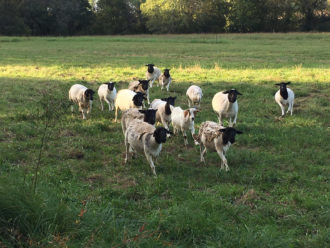 “The SARE grant was wonderful in that it gave me an opportunity to try some new ideas, reaffirm what is already known in the industry, and disprove, at least on my farm, some widely held beliefs,” said Harris. “For example, one belief commonly known in the industry is that 20 percent of animals deposit 80 percent of the egg populations. And if you remove the 20 percent of wormy animals, you will remove most of the worms.  For my farm, that’s simply not true. If that were the case, 66 percent of my animals would have to be culled to remove 80 percent of the worms. The worm load was, fairly, evenly distributed.”

Looking to the Future

On a cool, crisp, clear October morning, Harris walks through her pastures during feeding time, thinking of the study and the results; she admits she loves playing with numbers. She’s on a mission to uncover other sustainable methods of controlling gastrointestinal parasites.

“Other solutions are out there. Other effective treatments exist. We just have to find them,” she said with determination. She pauses briefly. “Today is a beautiful day, isn’t it?”

Harris looks off in the distance at Tennessee’s rolling hills. To the future perhaps: To retire to the farm and to an industry she and her family have grown to love, with the dream of a strategy in her back pocket that will benefit all small ruminant producers and their animals.

Published by the Southern Region of the Sustainable Agriculture Research and Education (SARE) program. Funded by the USDA National Institute of Food and Agriculture (NIFA), Southern SARE operates under cooperative agreements with the University of Georgia, Fort Valley State University, and the Kerr Center for Sustainable Agriculture to offer competitive grants to advance sustainable agriculture in America’s Southern region. This material is based upon work that is supported by the National Institute of Food and Agriculture, U.S. Department of Agriculture, through Southern Sustainable Agriculture Research and Education, under sub-award number: FS17-297. USDA is an equal opportunity employer and service provider. Any opinions, findings, conclusions, or recommendations expressed in this publication are those of the author(s) and do not necessarily reflect the view of the U.S. Department of Agriculture.