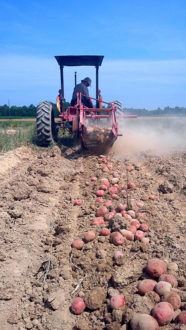 The fungal disease, caused by the soil born pathogen Sclerotium rolfsii, affects the stems of the plants and produces lesions on the tubers, impacting quality and yields.

“Over the past decade, occurrence of potato southern blight has increased on the Eastern Shore of Virginia and surrounding areas,” said Rideout. “There is no known potato cultivar resistant and traditional management relying on fumigants and fungicides has provided inconsistent results.”

In the two-year study (GS17-177), “Effect of Cultural Practices in Controlling Southern Blight of Potato in the Mid-Atlantic Region,” the researchers arranged field trials in a split-plot design with four replications, inoculated the fields which had no known history of southern potato blight, and studied the disease incidence of the plants over a week to two-week period. They also harvested the tubers, visually inspecting them for disease and calculating marketable yield.

Rideout and Gonzalez found that the earlier the planting date, the less incidence of disease was recorded, along with higher yields and higher tuber quality.

Cultivars that had the highest tolerance to southern potato blight coupled with earlier planting dates included ‘Atlantic’, ‘Snowden’ and ‘Accumulator’, all chipping potatoes. ‘Adirondack Blue’, ‘Red Norland’, and ‘Dark Red Norland’, cultivars grown for the fresh market, were impacted the greatest by disease and had greater tuber disease issues.

The researchers pointed out that if growers must choose a later planting date, ‘Accumulator’ would be a good choice, as the cultivar consistently produced the greatest marketable tuber yields and least diseased tubers across all planting dates, and appeared to be more disease-tolerant in later planting dates.

“This information, though limited, provides options for farmers to select cultivars and a planting date to minimize the negative impact on potato yields caused by southern potato blight,” said Gonzalez. “This could also help reduce the use of pesticides as a primary option for the management of southern potato blight.”

Published by the Southern Region of the Sustainable Agriculture Research and Education (SARE) program. Funded by the USDA National Institute of Food and Agriculture (NIFA), Southern SARE operates under cooperative agreements with the University of Georgia, Fort Valley State University, and the Kerr Center for Sustainable Agriculture to offer competitive grants to advance sustainable agriculture in America’s Southern region. This material is based upon work that is supported by the National Institute of Food and Agriculture, U.S. Department of Agriculture, through Southern Sustainable Agriculture Research and Education, under sub-award number: GS17-177. USDA is an equal opportunity employer and service provider. Any opinions, findings, conclusions, or recommendations expressed in this publication are those of the author(s) and do not necessarily reflect the view of the U.S. Department of Agriculture.