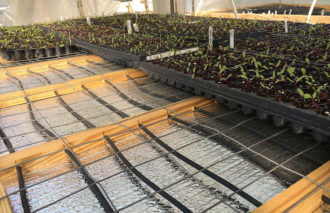 BOONE, North Carolina- With limited land and shortened growing seasons in the mountains of North Carolina, Ok-Youn Yu, an associate professor and assistant chair of Appalachian State University’s Department of Sustainable Technology and the Built Environment, saw potential in using greenhouses to combat hunger while increasing farmer’s profits and sustainability.

Through a Southern Sustainable Agriculture Research and Education On-Farm grant (OS18-123), Yu demonstrated that renewable energy and biomass-based greenhouse heating systems can cut farmer’s energy bills in half when integrated with a root zone heating system.

These systems were built and tested at two local farms in Watauga county, North Carolina.

Springhouse Farm in Vilas, North Carolina specializes in vegetables and cut flowers. They use a conventional, high-tunnel style greenhouse to propagate plants in late January through mid-February. To maintain the growing environment, a forced-air propane heater was set to 55 degrees Fahrenheit while the soil was heated from below with electric mats to keep it at proper germination temperature.

In 2017, a Nexus pilot system was installed to manage energy use inside the greenhouse.

An evacuated-tube solar collector was installed which uses the sun’s energy to heat water. To increase efficiency, a 50/50 propylene glycol and water mix was used. Once heated, the food-safe mixture is stored in a traditional 40-gallon propane water heater.  This system replaced the electric mats by carrying heat through a network of tubes to the root zone of plants.

A biochar kiln was installed to serve as a backup heat source.

“Biochar is like a charcoal, made burning organic material from agricultural and forestry waste called biomass like woods chips, crop residue and manure,” explained Yu. “To make that, we need a process called slow pyrolysis. That means oxygen-free or low-oxygen conditions, and heat up to about 500 Celsius. That’s easily over 1,000 Fahrenheit. Heat it for one to two hours without oxygen, then we can make biochar if all conditions are met.”

To capture heat from the pyrolysis process, a heat exchanger was connected to the kiln, which warms the heat exchange fluid and circulates it back to the storage tank for later use.

Heat from the solar collector and kiln raises the heat transfer fluid temperature to around 140 Fahrenheit. When needed, a soil-sensing thermometer activates a pump which circulates the fluid through a series of tubes to the root zone of plants on the germination bench. A valve mixes hot and cold fluid to maintain soil temperatures at 70 Fahrenheit. If the fluid in the storage tank drops below 80 Fahrenheit, a propane heater is activated.

In the summer months, excess heat can be routed to a food dehydrator.

After testing the system in 2017, the propane space heater shifted to supplemental heat. This allowed the pilot system to provide the majority of heat in 2018.

Following the 2018 growing season, the germination bench cover was upgraded and an automated mixing value added to reduce heat loss. This eliminated the need for the propane space heater and in 2019, the greenhouse was heated entirely by the new pilot system.

To measure efficiency throughout this process, propane consumption was monitored and heat degree days calculated by subtracting the average daily temperature from a baseline of 55 degrees to normalize yearly weather variances.

In 2019, with 187 more heat degree days and seven more days below freezing than 2016, propane consumption dropped from 180 gallons to 81 gallons. This shows significant energy savings and a large reduction in fuel use.

Against the Grain Farm had a similar pilot heating system installed as part of the SSARE grant.

ATG farm has a passive greenhouse. Without a heating system, the greenhouse is designed to capture the maximum amount of heat possible, store it in a thermal battery and slowly release it to maintain a consistent temperature.

Again, a pilot heating system with solar collectors and a biochar kiln were added along with a food dehydrator and vertical germination racks.

The greenhouse is used heavily from January to April. With no built-in heating source, the biochar kiln provides heat when sunlight is unavailable.

When the biochar kiln is running, the same heat transfer fluid pumped at 3 gallons per minute through a heat exchanger, connecting the 300-gallon thermal battery to the kiln. A temperature-controlled pump circulates the fluid when a 6.5 Celsius difference is detected between the kiln and the thermal battery.

The energy captured from the biochar kiln was monitored over the course of the 2018 growing season. On average, 14.8% of the excess heat energy was captured, providing renewable energy and a useful soil amendment from an unused by-product.

Research like this looks to reinvent the heated greenhouse by using on-farm biomass and solar energy to create year-round growing conditions without the use of fossil fuels.

Published by the Southern Region of the Sustainable Agriculture Research and Education (SARE) program. Funded by the USDA National Institute of Food and Agriculture (NIFA), Southern SARE operates under cooperative agreements with the University of Georgia, Fort Valley State University, and the Kerr Center for Sustainable Agriculture to offer competitive grants to advance sustainable agriculture in America’s Southern region. This material is based upon work that is supported by the National Institute of Food and Agriculture, U.S. Department of Agriculture, through Southern Sustainable Agriculture Research and Education, under sub-award number: OS18-123. USDA is an equal opportunity employer and service provider. Any opinions, findings, conclusions, or recommendations expressed in this publication are those of the author(s) and do not necessarily reflect the view of the U.S. Department of Agriculture.