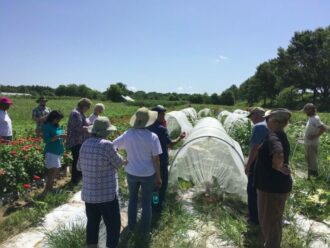 High-value vegetables like squash, pumpkins, watermelon and cucumbers are susceptible to viral diseases and damage from white flies and aphids. Despite being grown across the South, effective pest management practices for this group of vegetables, called cucurbits, are hard to implement.

Starting in 2018, a multidisciplinary team of researchers, Extension specialists and vegetable growers from Florida and Alabama began to evaluate a host of IPM practices in a real-world setting.

Tactics like row covers, companion planting, adding beneficial bacteria to the soil, and releasing predator insects are known to be successful pest control practices in some cases. However, the team saw a lack of real-world knowledge on how to implement these practices and the most economical methods of using them.

“One key constraint for growers in the Southeast is a lack of control measures for the pests. Currently, there aren’t any chemicals to control the viral diseases caused by insects. Organics growers struggle too, as they have fewer ways to manage insect pests. With that in mind, we wanted to test solutions that were shown to work in our previous work with growers.

“Throughout the project, we wanted to create pest control measures that were both effective and profitable for growers to use,” said Rammonhan Balusu, a research fellow at Auburn University, and a key contributor on the project.

With funding from Southern SARE, the team evaluated a wide range of practices in multiple states for several years.

After learning about each tactic individually, they developed tools for farmers and held training events for thousands.

“In the past, we worked with a grower in Alabama who successfully used row covers to protect his crops. We wanted to test several different methods of row covering to find the most economical way for growers to use this practice. We see lots of potential in scenarios where chemical pest control measures aren’t used, said Balusu.

“Based on our experience with other crops, we also wanted to test a systems approach in our research so we could find ways to use the environment to complement the crops, and control pests. In the past, a class of soil microbes was proven to help tomatoes defend against infects. We tested this, along with a few other ideas, to see if they could work for cucurbit plants as well.”

Row covers, or exclusion screens, serve as a physical barrier between the plants and their pests. To effectively pollinate the vegetables, these screens must be opened or removed during the season. The team tried several ways to integrate the row covers with the crops.

They studied companion planting by planting marigold, cowpea and sweet alyssum alongside the vegetables to attract beneficial insects and keep pests off the vegetables.

They also released Amblyseius swirskii, a predatory mite, to see if it could serve as a predator for aphids and white flies.

They were able to reach several conclusions that could help growers.

Row covers significantly reduced crop damage when compared to uncovered plants. However, economics played a role in the effectiveness of these practice for growers.

The team found that placing a special kind of bumblebee hive inside the row covers showed a significant increase in yield and less crop damage compared to all other test plots. However, economic analysis showed that opening the ends of the row covers at the start of flowering and closing them after ten days was the most economic practice because it is cheaper and easier for growers to use natural pollinators.

“Initially, we tried planting in the space between the rows of vegetables, but we saw that this was not very effective because of competition with weeds and an inability to irrigate the companion plants.

“In later trials, we planted the companion plants inside the plastic with the vegetables and saw greater success. We did not find the two plants competed with each other, and saw benefits under the right conditions” said Balusu.

While both marigold and cowpea plants attracted high numbers of aphids, the data showed that marigolds were more effective at trapping the aphids and keeping them away from the squash plants.

While sweet alyssum showed lower numbers of aphids than cowpea or marigolds, it attracted high number of natural predators.

During the research, they also noticed a reduction of whiteflies in plots where the Amblyseius predator mite was released. This suggests that A. swirskii is capable of suppressing whitefly populations. However, the data indicated that these reductions did not affect the incidence of whitefly-transmitted viruses or total marketable yield.

The team did not see any positive effect from the use of commercial microbes in the field or in a laboratory setting, despite it being proven to be effective on tomato plants.

After completing the research, the data was compiled into a host of publications and shared at events across the southeast. In total, the team published over 30 articles and held 37 in-person events for producers. They also shared the information on a variety of digital publications. Because of their efforts, the research was able to reach thousands of growers and researchers.