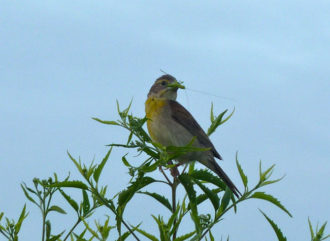 Monroe, who is now pursuing a post doctorate at Colorado State University, said that establishment costs of native warm season grasses – 8-9 times greater than the initial maintenance cost for bermudagrass – may turn off many livestock producers. However, the study revealed that average daily weight gain of cattle on native warm season grasses, particularly for the Indian grass monoculture, yielded up to 36 percent marginal rates of return.

“In other words, for every $1 invested in native warm season grass establishment, producers would recoup their investment plus 36 cents in additional revenue over a bermudagrass/tall fescue grazing system,” said Monroe.

Researchers focused on Dickcissels in the study because they are common in Mississippi, yet their populations are declining.

Depending on the overall goals of the farming operation, native warm season grasses may be an alternative to bermudagrass for livestock producers interested in diversifying their grazing operation while enhancing biodiversity.

The SSARE-funded project, “Evaluating Conversion of Bermudagrass Pastures to Native Warm Season Grass: Profitability analysis and response of wildlife and imported fire ants (GS12-116),” can be found in the national SARE projects database.

Read more about the study.