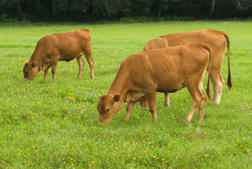 IUKA, Mississippi – A Mississippi livestock producer has found that native warm-season grasses pack more of a nutritional punch than commercial non-native forages, but he recommends that the grasses be grown for grazing rather than for hay.

There is a movement, however, to restore native warm-season grasses, which have degraded and been out-competed by non-native grass varieties.

“The primary effect on the sustainability of agriculture across the South,” said McKee, “is that native grasses can provide forage for livestock and are a better food and habitat source for wildlife than non-native grass varieties. In addition, it’s thought that native grasses are easier and cheaper to maintain, lowering the producers’ annual production costs while at the same time improving the wildlife population.”

In the SSARE study, “Comparing Native Grass Species to Bahiagrass as a Forage Hay Crop (FS11-256),” McKee found that the native grass species were more drought resistant and required little to no fertilizer compared to the Bahiagrass.

In addition, the nutritional value of the native grasses was comparable or higher than the Bahiagrass. In a forage analysis, for example, the crude protein of Indian grass was 7.45 percent and the total digestible nutrients (TDN) was 50.17 percent, compared to 6.93 percent crude protein and 50.62 percent TDN for the bahiagrass.

McKee also found that the native grasses produced higher yields at cutting, 4.5 bales per acre in one cutting compared to 3 bales per acre with the Bahiagrass. “Hay production was one half bales more per acre with the native grasses at one cutting versus two cuttings for Bahiagrass,” he said.

Despite the benefits of the native grasses over the more common forage, McKee indicated that both Indian grass and little blue stem were difficult to establish.

“This is due to the fact that the larger stems at recommended cutting height (eight inches or every five weeks, whichever comes first) cause very course hay rolls, which leads to more moisture absorption. In turn, this causes more hay loss than with Bahiagrass,” said McKee. “Also at feeding, cattle will eat the fodder and leave the stems which eventually build up in the hay ring.”

However, native warm-season grasses as grazing forages may be a more economical alternative to commercial forage varieties, and prove themselves as a more reliable wildlife food source, said McKee.