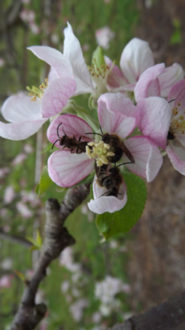 LAWRENCEVILLE, Georgia – Commercial Georgia apple producers looking for an alternative to the honeybee to pollinate their orchards can say hello to the native mining bee (Andrena crataegi).

Georgia Gwinnett College researchers have named the mining bee Georgia’s “apple bee,” for its abundance in north Georgia apple orchards and its efficiency in pollinating blossoms. The pollinator, about the size of a honeybee, takes over as a primary pollinator in situations where the honeybee is unable to carry the workload.

In a 2012 Southern Sustainable Agriculture Research and Education (SSARE) study, zoologist and project coordinator Mark Schlueter, along with taxonomist Nick Stewart, collected and identified pollinators at four north Georgia apple orchards. Over 5,000 native bees were collected, representing 5 families, 40 genera and 115 species. They found that Andrena crataegi was the most abundant and effective pollinator, followed by mining bees of the sub-genus Melandrena, bumblebees and carpenter bees. “The research, so far, has effectively addressed steps 1 and 2,” said Schlueter.  “We also assessed whether the mining bees will use nest boxes filled with sand/loam mixtures. Unfortunately, our results do not support the hypothesis that nest boxes will boost native bee abundance.”

Andrena crataegi lives in enormous systems of underground burrows close to its food source, so providing the bee with an artificial nesting source was studied.

“Initially, the mining bees colonized both the raised nest boxes and in-ground nest boxes. These mining bees did construct tunnels in the soil in the nest box to be used as their nests,” said Schlueter. “However after less than a week, the bees abandoned the nest boxes. At the same time, we observed the construction of several large nests in bare patches of dirt located under apple trees.”

The researchers concluded that large bare earth patches are a prerequisite to mining bee colonization, and factors ranging from the size of the nest boxes to temperature fluctuations could have been the cause of why the bees failed to colonize the nesting boxes.

Nesting box studies continue, including preliminary designs for the construction of trenches and the use of the bee’s preferred clay soil, both of which fit the prerequisites needed by mining bees to colonize an area.

Stewart has taken on the task of identifying the bee species collected during the 2010-2013 studies: roughly 16,000 total bees. Stewart originally designed the project in 2009.

For more information on the project, visit the SARE Projects Database and search project numbers OS11-061 and OS12-066.