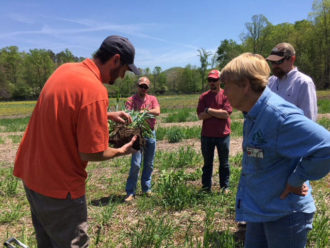 HORSE SHOE, North Carolina – Whitaker Farms, a family vegetable operation nestled on the edge of the Pisgah National Forest, has been managed conventionally for generations. But last year, owner Phillip Whitaker decided to take part in a study to test the benefits of no-till and cover crops on soil health.

Despite the short period of time, the differences between the tilled fallow plot and the no-till cover crop plot were striking: 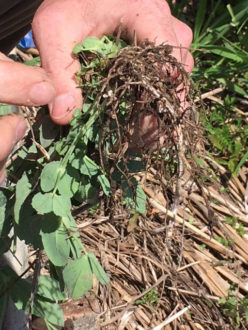 White nodules on the roots of this legume are an indication that nitrogen is being fixed in the soil. Photo: Candace Pollock-Moore, Southern SARE

For visitors participating in a field day at Whitaker Farms on a warm May day, the message was clear: the use of cover crops in a no-till system builds soil health.

“The biggest difference when it comes to soil health is management. The soil in that no-till, cover crop plot is very much ‘alive’ because of proper management practices,” said USDA-NRCS Southeast regional soil health specialist Nathan Lowder.

Whereas the soil in the tilled, fallow plot was…well, field day participants got the idea.

“When you till the soil, you disturb that soil structure. You disrupt that soil community,” Lowder explained. “You want to practice a system that promotes continuous living roots and minimizes soil disturbance. We must view the soil as a house for living organisms.”

“We also want to maximize biodiversity and maximize soil cover. Cover crops help you keep the soil covered as much as possible, in addition to the dozen plus other benefits that cover crops provide,” said Lowder. 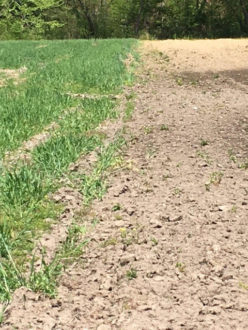 The cover crops project on Whitaker Farms, funded through a Southern Sustainable Agriculture Research & Education (SSARE) On-Farm Research Grant, is part of a larger effort by the North Carolina Foundation for Soil and Water Conservation to evaluate the use of cover crops on North Carolina farms. The two-year project (OS17-105), “Evaluating On-farm Use of Multi-species Cover Crops,” is looking at multi-species cover crop systems in three physiographic regions in the state to measure the short-term changes in soil chemical, physical, and biological properties by measuring increased soil aggregation and organic matter, microbial activity, and water infiltration rates. The goal is to demonstrate that a diverse mix of cover crops, properly managed, will increase soil functions and lead to a more sustainable farming system.

The cover crop mixture being used on the Whitaker Farms plots was barley, Austrian winter peas, crimson clover and radishes, planted ahead of such cash crops as field beans and squash.

“Cover crops are not new technology,” said Lowder. “They are old farming ways, but with a modern understanding of how they perform to build soil health.”

A fact sheet on the 2016/2017 trials of cover crops use on Whitaker Farms was developed by the North Carolina Foundation for Soil and Water Conservation as an educational publication.

Published by the Southern Region of the Sustainable Agriculture Research and Education (SARE) program. Funded by the USDA National Institute of Food and Agriculture (NIFA), Southern SARE operates under cooperative agreements with the University of Georgia, Fort Valley State University, and the Kerr Center for Sustainable Agriculture to offer competitive grants to advance sustainable agriculture in America’s Southern region. This material is based upon work that is supported by the National Institute of Food and Agriculture, U.S. Department of Agriculture, through Southern Sustainable Agriculture Research and Education, under sub-award number: OS17-105. USDA is an equal opportunity employer and service provider. Any opinions, findings, conclusions, or recommendations expressed in this publication are those of the author(s) and do not necessarily reflect the view of the U.S. Department of Agriculture.