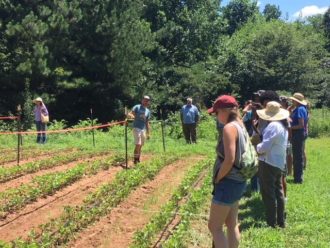 DECATUR, Georgia – When summer temperatures rise and moisture increases in the Southeast, so does Southern stem blight – a hard-to-control fungal disease that can quickly turn your healthy, productive tomatoes, squash or peppers into wilting, decaying plants.

Southern stem blight is a nightmare for small-scale vegetable producers, especially those who follow organic practices and can’t use chemicals for control measures.

But Reynolds hopes he’s found a sustainable control method: applying compost tea to the plant’s root zone to suppress the infection. He’s in the second year of a two-year Southern Sustainable Agriculture Research & Education (SSARE) Producer Grant project that is testing previously published research suggesting organic amendments such as compost – and the beneficial microbes that are present — can stem the spread of Southern stem blight. He’s focusing his work on summer bush beans.

Reynolds held a workshop recently at East Lake Commons to educate farmers on Southern stem blight and to share preliminary project results. East Lake Commons is a co-housing community that owns 4 acres of certified organic farmland in the heart of metro Atlanta. Since 1998, homeowners have leased their farm to a landless farmer in exchange for stewarding and working the land. Reynolds is the 5th tenant to farm the land. East Lake Commons has hosted Reynolds’ Love is Love Farm since 2011. Joe Reynolds of Love is Love Farm shows off the compost tea brewer to participants of the field day. He is hoping that the microbes found in the tea will help vegetable plants overcome Southern stem bight. Photo by Candace Pollock-Moore, Southern SARE.

“We use the compost on our farm as a way to increase sustainability, build up carbon in the soil, develop the soil’s moisture holding capacity, as a mild fertilizer, and to inoculate our fields with beneficial microbes. To maximize this resource, the compost is also brewed into a tea,” said Reynolds. “Our research focuses on testing the efficacy of using compost tea as a competitive biostimulant to increase the beneficial microbial activity, which could suppress the negative activity of Southern stem blight. We wanted to take a probiotic approach to come up with a strategy to challenge and inhibit the spread of the disease.”

Results of the first year’s study on bush beans has been mixed. In the project (FS17-303), “Evaluation of Southern Stem Blight Control in Green Beans with Aerated Compost Tea in Drip System,” Reynolds and his colleagues conducted two trials, 9 subplots per trial with three treatments (a control with no compost tea; a single, one gallon dose of compost tea; and a double dose of compost tea).

“Between both trials there wasn’t a clear pattern,” said Reynolds. “The single treated plants in Trial 2, however did show promise for this year’s trials if the trend continues.” Reynolds will conduct two more trials this summer.

“Despite the results so far, we still believe our hypothesis about compost tea competing with Southern stem blight is totally viable. The results are raising a lot more questions about the nature of the study that is worth further exploring,” said Reynolds. Such research aspects include the level of finishing compost tea, practicing various mulching methods, and analyzing the severity of Southern stem blight along field edges compared to the middle of the plot.

“If anything, this research is creating a producer-to-producer buzz around Southern stem blight,” said Reynolds. “There’s nothing out there to manage it organically, and to be able to conduct this SARE-funded research that is creating conversation and asking questions about potential solutions has been very rewarding.”

Published by the Southern Region of the Sustainable Agriculture Research and Education (SARE) program. Funded by the USDA National Institute of Food and Agriculture (NIFA), Southern SARE operates under cooperative agreements with the University of Georgia, Fort Valley State University, and the Kerr Center for Sustainable Agriculture to offer competitive grants to advance sustainable agriculture in America’s Southern region. This material is based upon work that is supported by the National Institute of Food and Agriculture, U.S. Department of Agriculture, through Southern Sustainable Agriculture Research and Education, under sub-award number: FS17-303. USDA is an equal opportunity employer and service provider. Any opinions, findings, conclusions, or recommendations expressed in this publication are those of the author(s) and do not necessarily reflect the view of the U.S. Department of Agriculture.