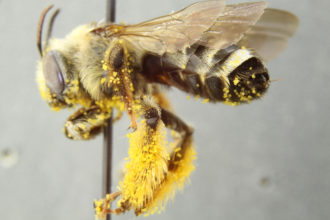 GAINESVILLE, Florida – Natural landscapes surrounding North-central Florida farms may influence native pollinator diversity along with on-farm vegetation management, according to preliminary results of a University of Florida study. The findings may be useful to farmers interested in encouraging the number and types of native bees that visit their farms.

Rosalyn Johnson, a graduate student in wildlife ecology, received a Southern Sustainable Agriculture Research & Education (SSARE) Graduate Student Grant to study the contribution of native bees in sustainable agriculture in northern Florida as an alternative to the honey bee, which has been in decline for several years.

“Declining honey bee populations and the possibility of crop pollination by native bees has drawn our attention to these creatures,” said Johnson. “With this study, we wanted to lay the groundwork for what native bees are doing on these Florida farms: what their communities look like, what kinds of pollen they are carrying, and what environmental factors encourage their diversity.”

“We have found a positive correlation (in very preliminary analyses) between bee species, bee numbers and the presence of pastureland near fields,” said Johnson. “If this holds true in the final analyses, it could relate to the fact that 70 percent of Northern Florida’s bee species are ground nesting bees that require those habitats for part of their life cycle.” Bee bowls on transect in a row of vegetables. Photo courtesy of Rosalyn Johnson, University of Florida.

To answer questions about on and off-farm factors influencing bees, and the species of pollen they select, the researchers collected and identified bees from the farms and the pollen they were carrying. They are still analyzing the data, but so far have collected and identified over 1,400 bee specimens of 60 species.  The largest number of bees collected is in the genus Lasioglossum, commonly known as the sweat bee. Other bees collected include types called leafcutter bees, bumble bees and carpenter bees. The researchers found that the bees collected often carried more than one type of pollen.

“What we know at this point is that the bees not only were carrying wildflower pollen, but they were also carrying crop pollen,” said Johnson. “Whether native bees pollinate Florida crops can’t be determined without additional research, but one could infer that the potential for pollination is there if the bee has crop pollen on its body.”

So what does this all mean to the farmer?

“This part of Florida hosts about 300 native bee species, of which we found almost 60 on the farms in our study.  Native bee size and behavior and some emerging work documenting high pollination efficiencies make the native bee community a potentially viable pollination service provider, in addition to the honey bee, so it’s worth spending time to study their ecology and learn more about them,” said Johnson.

Once data analyses are completed, researchers will be able to address some aspects of the relative importance of on-and off-farm factors.

“We’ll know more by the end of the year,” said Johnson.