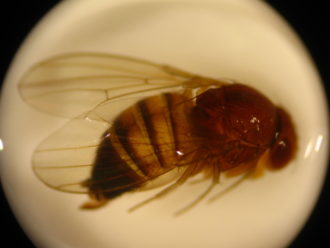 The spotted wing Drosophila – a vinegar fly related to the common fruit fly — arrived in the United States from Asia in 2008 and has spread across the Southeast. It showed up for the first time in Florida in 2009. The females use a serrated egg-laying structure to puncture the fruit’s thin skin and lay several eggs inside the fruit. It only takes a few days for the larvae to hatch and begin feeding on the crop. Iglesias said that it’s not uncommon for several females to lay claim to one fruit, dramatically increasing the number of larvae that can attack the crop.  From 2012 to 2014, Iglesias found that the highest populations of this fly are found in the central and north-central parts of the state.

“It’s generally recognized that the economic threshold of the pest is one,” said Iglesias.

Currently, some chemicals are available to control the pest, and growers are also encouraged to apply cultural control methods, such as frequent harvest intervals and crop sanitation (picking up dropped fruit to prevent additional habitat sources).

In the SSARE-funded project, she researched several IPM techniques:

In addition to cultural techniques, the researchers identified additional insecticides, which are recommended for use in a rotational program to manage the spotted wing Drosophila.

More information on the research results can be found in the study’s final report, “Developing an Integrated Pest Management Program for a Newly Introduced Pest in Florida Blueberries: The spotted wing Drosophila, Drosophila suzukii.”

Published by the Southern Region of the Sustainable Agriculture Research and Education (SARE) program. Funded by the USDA National Institute of Food and Agriculture (NIFA), Southern SARE operates under cooperative agreements with the University of Georgia, Fort Valley State University, and the Kerr Center for Sustainable Agriculture to offer competitive grants to advance sustainable agriculture in America’s Southern region. This material is based upon work that is supported by the National Institute of Food and Agriculture, U.S. Department of Agriculture, through Southern Sustainable Agriculture Research and Education, under sub-award number: GS12-114. USDA is an equal opportunity employer and service provider. Any opinions, findings, conclusions, or recommendations expressed in this publication are those of the author(s) and do not necessarily reflect the view of the U.S. Department of Agriculture.