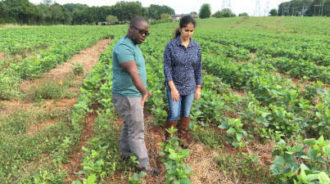 CLEMSON, South Carolina – Among the myriad of benefits cover crops provide to a row crop or vegetable operation, Clemson University researchers have found another one: Cover crops do not deplete water stored in the soil profile, thus preserving the precious resource for the cash crop – an all important function, specifically in times of drought.

“We need to bring biodiversity to our farming systems to alleviate drought stress, and cover crops are one practice that provides the benefits to achieve that,” said Ricardo St. Aime, a Master’s student and Fulbright Scholar from Haiti who worked on the project. “But many farmers are hesitant to adopt cover crops. One reason is that they fear cover crops might bring water resource competition for the following cash crop. We conducted this study to determine whether or not this is true.”

Soil water content was evaluated starting from 74 days after cover crops planting and measured at various depths, ranging from 4 inches to 39 inches. Biomass was hand harvested at 83, 111 and 137 days after planting to determine dry weight.

“Cover crop water use efficiency was estimated as the amount of dry biomass produced per unit of water used during the growing period,” said Narayanan, an agronomist with the Department of Plant and Environmental Sciences. “Identification of high water use efficient cover crops, as a single species or in a mix, helps identify cover crops that produce large amounts of biomass, use less water, or a combination of both.” 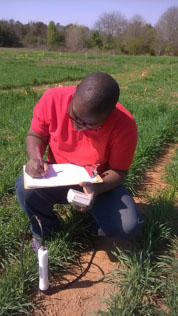 Researchers found that all cover crop treatments, both in the vegetative stage and the flowering stage, retained more or equal amounts of soil moisture compared to the controls. Even after one month after cover crop termination, results showed that soil moisture was still available for use by the cash crop.

“This does not support the perception that cover crops will deplete soil moisture, which would lead to water stress for the following cash crop,” said St. Aime.

“The findings emphasize that it’s important to incorporate a grass, legume and brassica for the best cover crop mixture,” said St. Aime. “Grasses produce high biomass and catch nutrients, legumes fix nitrogen, and brassicas are good for biofumigation and alleviating compaction. For more residue, grow either cereal rye or a mix of all three functional groups. Although turnips and crimson clover didn’t use much water, they are poor biomass and ground cover producers.”

Researchers hope that the results will help farmers develop a cover crops package that will optimize biomass while conserving moisture for subsequent crops.