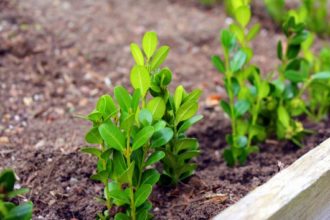 Over the two-year period, researchers found that most of the cover crops along with soil solarization (an environmentally friendly process of using solar energy to kill soil pathogens by covering the soil to increase the soil temperature) were effective in controlling Phytophthora root rot in boxwoods. The researchers conducted two field trials: one where fields where inoculated with P. nicotianae, and one where the fields contained natural pathogen pressures.

“Boxwood growers can use information from this study and can be benefited by using biofumigant crops with solarization to manage Phytophthora root rot in their field production,” said Baysal-Gurel.

In the pathogen-inoculated field trials, researchers planted the cover crops in randomized inoculated ground beds with four replications per treatment. Once the cover crops flowered, they were chopped and incorporated into the soil, then covered with a polyethylene film for 30 days. After the 30-day period, boxwoods were planted into the plots and monitored for three months for disease occurrence, incidence, phytotoxicity and defioliation. Root systems were assessed for disease severity. Disease impacts using cover crops were compared with infested/non-biofumigated non-covered, and non-infested/non-biofumigated non-covered plots as controls, along with an application of biofumigant Dominus and only solarization.

Over the two-year trials, all treatments except for the Dominus applications and purple top forage turnips significantly reduced Phytophthora root rot disease severity by as much as 50 percent compared to the controls.

The treatments in the on-farm trials with natural pathogen pressure were similarly conducted. Although disease severity was low to moderate, researchers found all cover crops except yellow mustard ‘White Gold’ significantly reduced Phytophthora root rot severity compared to the control.

Baysal-Gurel said that farmers are slow to adopt more sustainable biofumigation strategies because of concerns over efficacy, economic cost, and compatibility with their production practices. She hopes that the project results help to promote the adoption of biofumigants by documenting their effects in multiple nursery systems and demonstrating that cover crops as biofumigation, in combination with solarization, can be an accepted, sustainable field-grown nursery production systems for nursery growers in the Southern region.