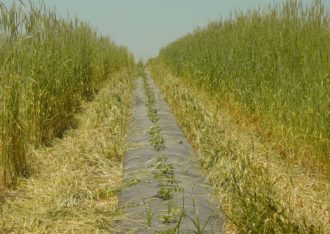 Rye Cover crop after being rolled. (Photo by Steven Li)

Incorporating cover crops as biodegradable mulches is not a new practice, said Li, but the practice remains a challenge for many vegetable growers in the Southeast due lack of information on mulching performance, residue breakdown, and additional costs.

“One of the biggest problems in expanding vegetable production in the Southeast is limited weed control options via herbicides and tremendous weed pressure. Many vegetables are sensitive to herbicide applications and herbicide drift, and the use of plastic mulch can be costly,” said Li. “Using biodegradable mulches is a more natural alternative, but adoption rate in the Southeast is low. Little research and extension work has been done to evaluate the efficacy and economic viability of biodegradable mulches and promote them to vegetable farmers as another weed management option.”

In the two-year study (OS18-117), “Evaluation of High-residue Cover Crop Systems and Biodegradable Mulches for Weed Control in Vegetable Production in Alabama,” field studies were conducted in Alabama with white clover as a living mulch, and cereal rye and a mixture of cereal rye and crimson clover used as biodegradable mulches once terminated. Cover crops were spread in two row middles in between plastic beds in early October. They were terminated in early April and rolled down with tractor tires.  Four treatments did not receive glyphosate termination and was rolled down green. Watermelon and bell pepper plants were transplanted directly into the plastic bed in the middle mulch treatments. The field plots (row middles) received a pre-emergence herbicide application (to terminate weeds prior to planting), a post emergence herbicide application, or no herbicide application at all, and were analyzed for effective weed suppression in both crops. Two controls were included: a non-treated control and a chemical control received herbicide termination, pre and post emergence applications

Researchers found that weed densities for all cover crops tested were significantly lower than the non-treated control, ranging anywhere from 65 percent to 96 percent. They found that the cereal rye and cereal rye/crimson clover mixture produced more biomass than the white clover and, as a result, were more effective mulches for suppressing weeds.

In addition, the bell peppers and watermelon grown in the cereal rye/crimson clover mixture yielded three to four times more than crops grown in the non-treated control. Cover crop treatments produced similar amount of crop as the chemical control with much less herbicide input. Cereal rye and cereal rye/crimson clover mixture rolled down green did not interfere vegetable quality and yield compared to the treatment terminated by glyphosate, which indicated roll down cover crop green in row middles is a viable option for growers without using glyphosate.

“Pre-emergence herbicide did not increase weed suppression above what the cover crop mixture could accomplish,” said Li. “Vegetable seedlings also suffered some injury. We suspect it was likely due to flumioxazin drift during termination of winter weeds prior to planting.”

The data suggest terminated cover crop residues in combination with post-herbicide applications can produce similar weed suppression and crop yield results to strictly using chemical applications. Li said that rolling down cover crop without glyphosate termination and removing the pre-emergence herbicide application in a weed management system using cover crops could save Alabama growers an estimated $25 per acre, in addition to the benefits that cover crops provide including improve soil health, increasing soil organic matter, and conserving soil moisture. Li said that more research is needed to further explore the practicality of using cover crop residues for weed suppression in vegetable production and further evaluate the idea of living mulch such as white clover, but is pleased with the results of the Southern SARE-funded study as a starting point for reducing chemical applications and finding more environmentally friendly means of controlling weeds in vegetable production.