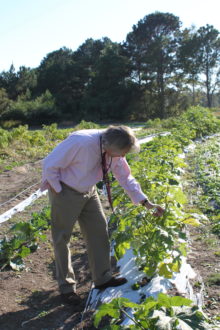 JOHNS ISLAND, South Carolina – Compost made from freshwater fish appears to perform just as well as compost made from saltwater fish in vegetable production, based on the results of a Southern Sustainable Agriculture Research & Education (SSARE) farmer project.

Sweetgrass Garden Co-op, located near Charleston, S.C., expanded its work in 2014 from a previous Southern SARE-funded study in 2011. The study showed that saltwater fish waste used as compost in tomatoes and cucumbers was superior to plant-based compost, better protecting tomatoes from diseases, such as Fusarium wilt, and boosting yields in cucumbers 30 percent higher compared to vegetable compost.

In the Southern SARE Producer Grant project (FS14-284), “Is Freshwater Fish Compost as Effective as Saltwater Fish Compost on Vegetable Production,” a field comparison of the two compost materials was conducted on eggplants and peppers.

The objective was to measure the yields of each row for a comparison of saltwater fish compost versus freshwater compost versus the control rows with no compost.

“In this study we demonstrated that compost made with inland lake fish is at least as efficacious as wild-caught salt water fish,” said Snyder. “The benefit to the small farmer who uses fish compost is obvious: Improved yield.”

Sweetgrass Garden Co-op grows fruits and vegetables and donates the food to local food banks and ministries for the needy in the Charleston, S.C. area.

Published by the Southern Region of the Sustainable Agriculture Research and Education (SARE) program. Funded by the USDA National Institute of Food and Agriculture (NIFA), Southern SARE operates under cooperative agreements with the University of Georgia, Fort Valley State University, and the Kerr Center for Sustainable Agriculture to offer competitive grants to advance sustainable agriculture in America’s Southern region. This material is based upon work that is supported by the National Institute of Food and Agriculture, U.S. Department of Agriculture, through Southern Sustainable Agriculture Research and Education, under sub-award number: FS14-284. USDA is an equal opportunity employer and service provider. Any opinions, findings, conclusions, or recommendations expressed in this publication are those of the author(s) and do not necessarily reflect the view of the U.S. Department of Agriculture.