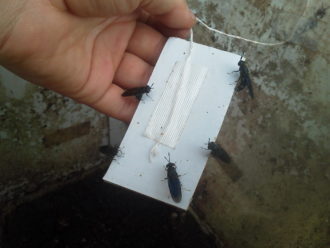 BLUFFTON, Georgia – The black soldier fly has turned out to be a key contributor to the sustainable agriculture efforts of one South Georgia farm.

For the past two years, the indigenous insect has been at the center of a Southern Sustainable Agriculture Research & Education (SSARE) Producer study at White Oak Pastures to determine how the fly fits in with the farm’s organic, multi-species rotational grazing, on-farm animal processing operations.

Turns out, the black soldier fly fills a nice gap in the farm’s zero-waste goals by breaking down animal waste from the abattoir into compost, while providing a natural high-protein poultry feed source.

“We are taking an unwanted by-product of livestock processing that has a negative value and creating a higher and better use for it through black soldier flies by creating two value-added products: compost and supplemental feed,” said farm owner Will Harris. “And we are creating these products using a resource that is already available to us and without using any energy.”

The black soldier fly, native to North America, exhibits characteristics that would be considered beneficial in agriculture. The adult fly does not bite, nor is it known to carry any diseases. In addition, the larvae are scavengers, thriving on several kinds of decaying matter such as carrion, manure, plant refuse and waste products. With a dry weight protein content of roughly 42 percent and a fat content of about 34 percent, the larvae also make ideal inexpensive feed for chickens. “With both systems, we have been able to rear larvae from egg hatching to maturity – raising them on the animal waste from the abattoir and collecting the compost, and then feeding the mature larvae to our chickens,” said Moshman, White Oak Pastures greenhouse manager. “However, we have found that our limiting factor in getting substantial numbers of mature larvae have been the number of eggs we can collect.”

In both rearing systems, the project researchers have been relying on natural egg laying from black soldier fly females to collect eggs. In the ProtaPod system, the females lay egg clusters in corrugated cardboard. Each cluster contains about 400 eggs. Once the eggs hatch, the larvae drop into the ProtaPod to begin feeding, and when they reach maturity, they will instinctively crawl their way out of the container where they are collected and fed to chickens.

“During peak black soldier fly season (April or May-September), we were harvesting about one to two pounds of larvae per day in the four ProtaPods that we have,” said Moshman, who has a background in entomology from Cornell University. “That is just a light snack for the chickens. It’s not enough to derive a substantial natural diet from.”

Results of the batch system faired better. While the ProtaPod is a system made up of multiple larval ages, each batch unit represents a stage in larval development.

“Meaning that I was making one batch a day and harvesting one batch a day, during a typical 40-day egg-to-maturity development cycle,” said Moshman. Within the 40 batch units, Moshman estimates yields doubled to roughly four to five pounds per day.

“That still qualifies as a snack for the chickens, but it was a step in the right direction,” said Moshman. “Clearly if you are a small farm with a small flock, either system would work well.” Black soldier larvae make a meal of on-farm animal waste. Lori Moshman, project manager, said that black soldier fly larvae are aggressive feeders and will break down just about any kind of food waste product within a matter of days. Southern SARE archives.

But the challenge for Moshman is to develop a rearing system that will support the farm’s goal of producing enough black soldier fly larvae year-round to feed the farm’s 90,000 chickens without using supplemental feed.

“I want to start out at a modest 500 pounds of larvae a day to do some experiments to see how the chickens respond to a black soldier fly diet,” said Moshman.

So how many eggs would it take to produce 500 pounds of larvae per day? Moshman estimates about 3.5 million. She is working with retired University of Georgia entomologist and black soldier fly expert Craig Sheppard on a rearing system that would support that number, as well as a business owner from Mississippi who could potentially supply the eggs.

“We’ve been relying on eggs from the natural population, but to pull this off, we realize that we need to breed our own eggs in a controlled facility, which we are looking at building here on-site in the near future,” said Moshman.

When it comes to the compost, Moshman hasn’t calculated how much compost the black soldier fly larvae generate. But, she said, the farm would like to produce enough larvae to break down all of the animal waste that is generated from the abattoir.

“In the batch system, the larvae are consuming 6 or 7 gallons of feed a day. We generate 6,000 pounds of animal waste a day, so clearly we aren’t even scratching the surface,” said Moshman. “I estimate it would take batches of at least 40 million larvae to break down that much waste on a daily basis”.

The farm currently uses a windrow composting system to break down its waste, which is then spread back onto the grazing pastures.

White Oak Pastures re-purposes what it produces on the farm by creating manure compost, recycling all the wastewater, and using an anaerobic digester, which generates 1,000 gallons of liquid fertilizer a day. In addition, the farm houses passive solar water-heaters on roof buildings to heat the water used in livestock processing, and a 50,000-watt solar voltaic array to power the processing plant.

In addition to livestock, the farm produces organically certified vegetables and pasture-raised eggs for a 150-member CSA.