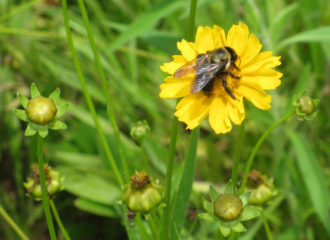 In a Southern SARE-funded On-Farm Research Grant project, researchers focused on nesting sites for mason bees and mining bees – the workhorses of the native bee world when it comes to pollinating apple blossoms.

If you want to attract the mason bee, build bee houses, said zoologist Mark Schlueter. “Mason bees require nesting tubes, since they are stem cavity nesters in nature,” he said. After some field experimentation, the researchers designed a series of bee houses with soil trenches placed in between each bee house. Each bee house contained 70 different sized nesting tubes, ranging from 6mm to 8mm in diameter.

A total of 32 bee houses were used in the study, spread out over three apple orchards in north Georgia.

Bee houses, like the ones pictured here that were installed at Mountain View Orchards in north Georgia, attract the mason bee — a native bee that is efficient at pollinating apple blossoms. Photo credit: Southern SARE

“Mining bees prefer patches of soil in which to dig tunnels for their habitat and to brood their young,” said Schlueter. Trenches were created at each orchard, two on one end of an orchard with additional “floral enrichments”, and two at the other end without an additional food source like cherry trees or flowering bushes.

“Nesting frequency was more than double on average in the floral enrichment trenches compared to the group without floral resources,” said Schlueter. “The project has shown that by providing habitat enrichments, we can boost native bee abundance.”

The study (OS14-090), “Investigating Artificial Native Bee Habitats as a Means to Boost Native Bee Pollination and Provide an Additional Revenue Source for Farmers,” is part of a larger effort to find ways to increase native bee populations for critical crops during times when honeybees are an insufficient pollinator source.

For several years researchers on the project have been surveying native bees in north Georgia apple orchards as alternative pollinators to the honeybee. They found that the native mining bee, followed by mason bees, bumblebees and carpenter bees serve as primary pollinators for apple blossoms. Currently, 542 species of bees have been listed in Georgia.

Published by the Southern Region of the Sustainable Agriculture Research and Education (SARE) program. Funded by the USDA National Institute of Food and Agriculture (NIFA), Southern SARE operates under cooperative agreements with the University of Georgia, Fort Valley State University, and the Kerr Center for Sustainable Agriculture to offer competitive grants to advance sustainable agriculture in America’s Southern region. This material is based upon work that is supported by the National Institute of Food and Agriculture, U.S. Department of Agriculture, through Southern Sustainable Agriculture Research and Education, under sub-award numbers: OS14-090. USDA is an equal opportunity employer and service provider. Any opinions, findings, conclusions, or recommendations expressed in this publication are those of the author(s) and do not necessarily reflect the view of the U.S. Department of Agriculture.