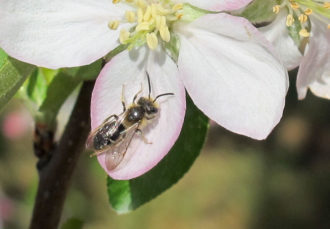 LAWRENCEVILLE, Georgia – Researchers with Georgia Gwinnett College have found that creating artificial nesting sites for native bees helps to increase their abundance – a boon for producers looking to native bee species to pollinate their crops.

For several years, zoologist and project coordinator Mark Schlueter and taxonomist Nick Stewart, have been surveying native bees in north Georgia apple orchards as alternative pollinators to the honeybee. They found that the native mining bee, followed by mason bees, bumblebees and carpenter bees serve as primary pollinators for apple blossoms.

“By establishing a strong network of native bees in Georgia agriculture, we can make Georgia agriculture more secure and sustainable,” said Schlueter. “In addition, an increase in reliance on native bees means that farmers will spend less money on pollination services that will increase farmer profits and potentially reduce food costs for the general public.”

In the study, the researchers created nesting sites for the mining bee and the mason bee. A mining bee at the entrance of the communal nest that she shares with other females. Photo by Nicholas Stewart.

To increase mining bee populations, four trenches (about 12 inches deep and 10 feet long) were dug near several apple orchards. An 18-inch tall hill, mixed with native soil and sand, was created next to the trench.

“Mining bees prefer patches of soil in which to dig tunnels for their habitat and a place to brood their young,” said Schlueter. “Based on previous studies, this raised, bare-soil and trench combination should attract the mining bees.”

Two trenches were placed at opposite sides of the sampling plot in each orchard. On one side, cherry trees and bushes that bloom before apple trees were added around the trenches as an additional food source. For the control, no trees or bushes were added.

“At each orchard, significant nesting took place in the trenches,” said Stewart. “Both mining bees and sweat bees were observed nesting. In addition, nesting frequency was more than double on average in “floral enrichment” trenches compared to the control group.”

To increase mason bee populations, the researchers placed four nesting boxes in the orchards. The centers of the boxes contained a large section of tubes that served as nesting sites. In addition, the nesting boxes were supported by posts of untreated pinewood containing enough substrate to serve as nesting areas for carpenter bees.

Researchers found that five species of mason bees utilized the nesting boxes, with the various bee species preferring specific-sized tubes inside the box.

“The project has shown that by providing habitat enrichments, we can boost native bee abundance,” said Schlueter.

The long-term goal of the research is to shift the pollinating services from honeybees to native bees as an alternative strategy of long-term crop pollination.

“If methods can be developed to boost the abundance of target native bee species, farmers can begin to shift their pollination services from the struggling honeybee to native bees,” said Stewart. “These changes will safeguard Georgia’s agriculture and will provide a more cost-efficient sustainable method of pollinating Georgia’s apple crops.”

Researchers received an On-Farm Research Grant in 2014 to continue their work: (OS14-090), “Investigating Artificial Native Bee Habitats as a Means to Boost Native Bee Pollination and Provide an Additional Revenue Source for Farmers.” The study will explore prototype habitat enrichments that are easy to construct, are cost-efficient, and have the potential to provide farmers with a supplemental source of income.