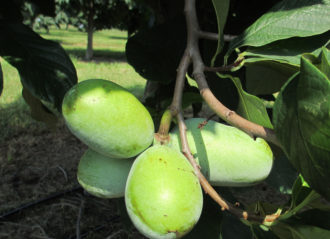 Through a $203,395 Southern Sustainable Agriculture Research & Education Grant, horticulturist Kirk Pomper and his colleagues used bark inlay grafting on three commercial pawpaw cultivars: ‘KSU-Atwood’, ‘Sunflower’, and ‘Susquehanna’. Grafting secures the top of a plant (the scion) to the lower rootstock for the purpose of strengthening cultivars, improving production, increasing yields, and building insect and disease resistance, among other benefits by joining the desired traits. With bark inlay, a thin layer of bark from the rootstock is removed, two parallel inlay cuts are made through the bark, and the scion is inserted into the inlay cuts and secured.

Pomper said that bark inlay is common in fruit trees, particularly in apple orchards, because of the superior strength of the union. “The technique, however, has not been well developed for pawpaw,” said Pomper. “The method was studied as an alternative to the negative effects of spring heating of grafts, as well as improve timing for successful spring grafting and cultivar selection.”

In the project (LS14-265), “Jump Starting Pawpaw Variety Production for the Industry: Developing grafting and top working approaches for growers,” the researchers grafted three trees of each cultivar using the bark inlay method in May (the ideal timeframe for grafting pawpaws) over a three-year period. The grafts took place in early May and in late May; scion take, flowering, and fruiting response times between to two grafting dates were measured.

Results found that the pawpaw cultivars had a higher success rate, greater growth and more precocious flowering and fruit production when the bark inlay grafting was performed in early May as opposed to late May.

Kentucky State University is developing bulletins and other educational resources on the bark inlay grafting technique and has held several field days demonstrating the process. Researchers hope that the results of the project will help increase pawpaw yields and enhance high quality marketable fruit from grower plantings.

Published by the Southern Region of the Sustainable Agriculture Research and Education (SARE) program. Funded by the USDA National Institute of Food and Agriculture (NIFA), Southern SARE operates under cooperative agreements with the University of Georgia, Fort Valley State University, and the Kerr Center for Sustainable Agriculture to offer competitive grants to advance sustainable agriculture in America’s Southern region. This material is based upon work that is supported by the National Institute of Food and Agriculture, U.S. Department of Agriculture, through Southern Sustainable Agriculture Research and Education, under sub-award number: LS14-265. USDA is an equal opportunity employer and service provider. Any opinions, findings, conclusions, or recommendations expressed in this publication are those of the author(s) and do not necessarily reflect the view of the U.S. Department of Agriculture.