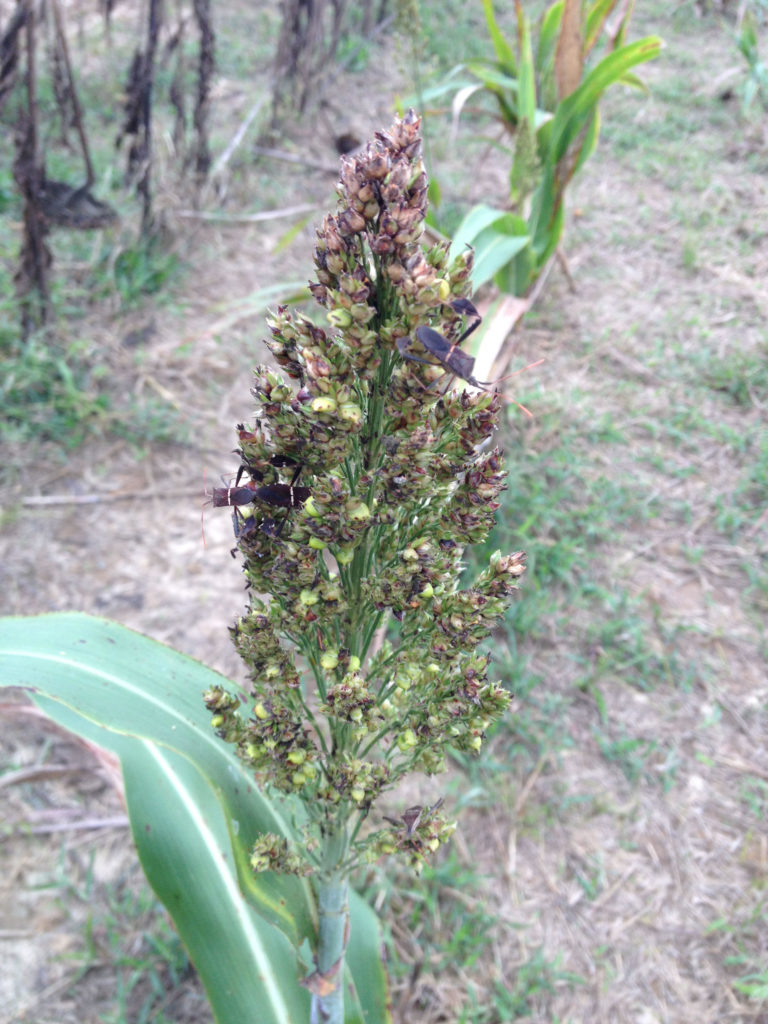 Integrated Pest Management or IPM is an ecological and multi-faceted pest reduction system aimed at providing economic, environmental and health benefits to society. Trap cropping is a unique pest prevention system that uses insect behavior to deter pest feeding. Trap crops work well for migratory insects that show a strong edge effect. That is, insects that land on the perimeter of fields to explore habitats.

There are two parts to the trap crop system, namely, the trap crop – generally a sacrificial crop (but there are exceptions!), and the main crop – one that growers want to protect. Trap crops are usually planted ahead of the main crop on good ground so that they become attractive to target pests. Insect pests land on the trap crop and stay there for food and oviposition (egg laying).

There is no universal trap crop that would attract all pests, so each system has to be carefully designed and managed with the insect’s feeding preference in mind. Growers have to consider the biology of the insect along with the ecological conditions around the farm for maximum benefits.

As this bulletin demonstrates, perimeter trap crops can be used relatively easily on small to medium sized farms. Benefits of trap cropping not only include effective pest management, but trap crops can also increase biodiversity, conserve natural enemies and reduce wind damage to main crops.

We encourage producers to refer to the work done at their local institution, and contact their Extension service for developing an IPM plan for their farm.

The leaffooted bug (Leptoglossus sp.) is a major sucking pest in tomatoes and many other solanaceous crops across the Southeast. Large aggregations of leaffooted bugs may be seen mating and feeding on green and ripening tomatoes. Most damage is done in the ripening stage seen in the form of discolored and distasteful fruit. Organic insecticides do not provide adequate relief from leaffooted bugs, resulting in poor marketability of the produce.

Peredovik sunflower and NK-300 sorghum were two trap crop varieties identified after many years of research in fruit production systems. Since 2011, focus of trap crop research in Alabama shifted to the tomato production system because of producer demand for the information and growing incidence of bugs in organic/reduced-input systems. Sunflower-sorghum trap crop systems were tested in large acres (~2 acre plots) using a perimeter and staggered system. Here are some major lessons learned from large-scale trap crop research and demonstrations over many years:

• Leaffooted bugs are visually attracted to the large head of Peredovik sunflower and the sorghum panicles in milk stage. Leaffooted bugs feed and oviposit on the trap crops, making the system very successful. Leaffooted bugs may be present on sorghum heads even in the late season providing long-term benefits to late-planted tomatoes (sunflowers bloom and mature quickly losing their attractiveness). NK-300 sorghum also does well under drought conditions, although plants may be stunted.

• Two rows of sunflower and sorghum are better than one: Once the direction of leaffooted bug migration is determined, trap crops can be planted as long rows around the main crop. Sorghum/sunflower trap crops can also be planted between two different crops – this is the most basic layout that has been successful in Alabama (e.g, planting two rows of each trap crop between tomatoes and okra; between tomatoes and watermelons; between tomatoes or squash and orchards). It is best to plant two rows of each trap crop two weeks ahead of transplanting tomatoes or other main crops. In this way, the trap crop rows become attractive habitat for leaffooted bugs and many beneficial insects. Keep the sunflower rows on the outside so that the blooming heads attract the first generation of leaffooted bugs and keep them there until the sorghum heads start to emerge. This system works well in a normal year with well-distributed rainfall events. This basic perimeter trap crop system can reduce 78 to 90 percent leaffooted bugs compared to tomatoes grown without trap crops. Appropriate insecticide applications to the sorghum head can significantly reduce leaffooted bug populations.

• Other benefits of a sunflower-sorghum trap crop system include reduction in wind damage and conservation of natural enemies. Nearly three insecticidal applications to the main crop were eliminated using a simple or staggered trap crop system. Reduction in insecticidal applications also conserved the natural enemy populations. Lady beetles, assassin bugs, spiders, and praying mantids were the most abundant natural predators in the trap crop, while Trichopoda pennipes (tachninid fly) was the most prevalent parasite that infested leaffooted bug adults. A shiny white egg on the head of leaffooted bug indicated parasitization.

• Organic insecticidal applications (natural pyrethrin and spinosad tank-mix or in rotation) should target the nymphs on sorghum heads; adult leaffooted bugs are extremely mobile and may not be controlled effectively. It is not recommended to treat the sunflower trap crop to protect natural enemies and pollinators that land on the large heads.

• When trap cropping is done over many years, producers may see gradual improvement in their crop quality as we have experienced in Alabama. With no need for targeted organic sprays for leaffooted bugs, we were able to use only Bt-based bioinsecticides to manage caterpillars. Other pest management tactics like insect-monitoring traps, scouting for leaffooted bugs on trap crops, and augmentation biological control can also become part of a true IPM system for producers. Squash is a crop that is at risk from insect pests throughout the growing season. The top three insect pests appear to be cucumber beetles, squash bugs, and squash vine borers – in that order in Alabama, but the order of infestation may change in other parts of the Southeast. Squash bug is by far the most destructive insect, not only because of the large numbers that routinely invade squash fields (long migration path), but they also vector cucurbit yellow vine decline (CYVD). CYVD can rob yields very quickly at the most critical time resulting in no chance for the farmer to react with a control measure. The squash bug problem is more severe in organic and reduced-input farms in urban or rural areas. This is where alternative insect management strategies like trap cropping can help greatly, but prior planning is needed. Many past research work in Connecticut, Vermont and North Carolina provided the motivation for initiating trap crop research on a large scale in Alabama, where insect pests are hyper-active (no winter kill). Based on published literature, Baby Blue Hubbard (High Mowing Organic Seeds, Wolcott, VT) and New England Hubbard (Baker Creek Heirloom Seed Company, Mansfield, MO) were evaluated against squash bugs and cucumber beetles. Here is a summary of research experiences from three production years (2013-2016).

• Hubbard trap crops can be direct-seeded one to two weeks ahead of the main crop like yellow crooked-neck squash. We have tried squash hybrids like Destiny, Prelude, and Dixie as the main crop. Because of the limited land for research, we have not explored other cucurbits or squash varieties, but producers can do their own on-farm evaluation. A major benefit of the Hubbard squash is that it produces plenty of marketable fruit that can allow producers to recover the cost of trap cropping.

• Planting the Hubbard trap crops close to the main crop is also critical to success. Recent observations from large-plot research in Alabama, where the aim was to minimize area under

• trap crops with various placement strategies, indicated that the effect of Hubbard squash trap crops is reduced 150 to 200 feet away from the main crop. In other words, a Hubbard trap crop system for large acres may require multiple staggered plantings of mixed trap crop varieties.

• Organic insecticide options for squash bugs are limited as adults can be difficult to kill. Another major challenge is to get good coverage with low-cost spray equipment to treat the large Hubbard squash leaves. Products such as pyrethrin (PyGanic) and spinosad (Entrust, Monterey Garden Insect Spray) can be used more effectively to reduce nymphs if the application timing is optimized. Since squash bugs prefer to stay in the trap crop, organic producers can stagger-plant the Hubbard to keep insects busy with no need for insecticidal applications.

• Hubbard squash fruits are also very attractive to squash bugs; adults and nymphs can severely deform the large soccer-ball sized fruits. It was surprising to see Hubbard squash trap crop plants tolerating such a heavy squash bug infestation without succumbing to the pest. It appears that late-season plantings of the yellow squash main crop can benefit from this as well.

This is a preliminary report on the effectiveness of trap crops for managing the yellowmargined leaf beetle (Microtheca ochroloma) based on large-plot studies initiated in 2015 in Alabama. The yellowmargined leaf beetle is a major pest of cool season brassica crops grown in much of Alabama and the Southeast. Due to rapid defoliation by adults and strong host plant attraction (turnips, napa cabbages, and many other brassicas), this leaf beetle has forced some small producers out of winter crop production. In Alabama, we have experienced yellowmargined leaf beetle outbreaks within two years of brassica production at two new research locations. Here are some basic trends from trap crop research that are continuing in Alabama. In this case, “Purple top white globe” turnips were direct seeded as the perimeter trap crop with cabbage as the main crop. • Turnips planted two weeks ahead of cabbages provided excellent attraction to stop adult beetle migration. Beetles were found feeding and mating on the trap crop in large numbers. The current recommended insecticide treatment threshold in organic production systems is one adult per plant. It is easier to control the leaf beetles on small turnips compared to cabbages in mid-to-late season.

• YMLB larvae feed on the foliage along with adults resulting in rapid defoliation of turnips. Larvae can also tunnel the turnip stems and, thereafter, feed on the developing roots causing irreversible crop disaster within two years of detection. As long as there are turnips available early in the season when the first generation arrives, yellowmargined leaf beetles won’t show up on the cabbages. However, lack of trap crops and multiple generations of adults later in the season may result in rapid movement of YMLB to the cabbages where they are very difficult to control with organic insecticides.

• Organic insect control recommendations are still being developed for the region. Application of Surround (kaolin clay) on small brassicas may help deter beetle colonization early in the season. Pyrethrin, spinosad and Chromobacterium-based products appear to slow down plant damage when applied at weekly intervals in field conditions. Producers may have to spray more often to kill the beetles in the trap crop.

Contact your local Extension agency for designing the most appropriate IPM system for your farm.